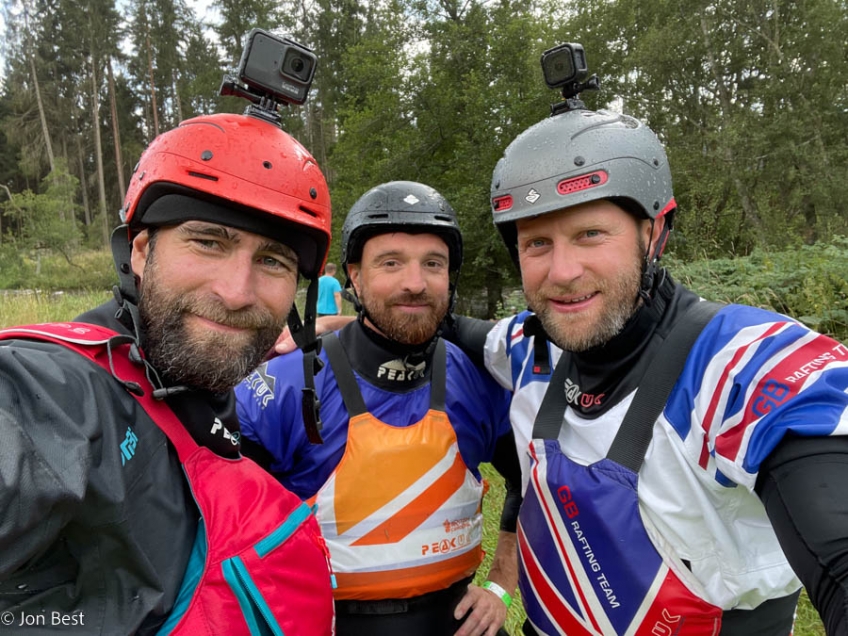 A last minute decision to drive 1000 miles to the Czech Republic resulted in five days of great paddling, great company, some carnage and an extreme race.The Devils Extreme Race 2022, now on its 16th edition saw over ninety paddlers from eight different nations battle for victory on the Vltava River.The Dam in the town of Lipno only releases water for four days of the year, this results in hundreds of paddlers gathering to the area.

The first water release was on Thursday at 2pm for two hours!Get on, get paddling and figure out the lines was the order of the afternoon, we quickly learnt that this was also everyone else’s plan.Slalom paddlers, white water kayakers, rafters and down river racers flocked to the Vltava to bash down the 7km stretch of river.A good first day with plenty of action, good lines, some carnage and a crazy train journey back to the put-in ended with a social in the party tent at camp one.

Friday presented itself with another afternoon of quality paddling.The water release held for longer which seemed to provide a slightly higher river level.The river started to become more familiar and after some questions to paddlers who looked to have competed in the Devis Race before, we began to figure out which parts of the river we would be competing on.Early to bed.

Saturday…race day.An early start to register and get our time bands.The first race was a qualifier, 1km race through the Window Dam to get our times.The top 32 paddlers would then qualify for the Boater X thought the Stair Case rapid.I was off the pace… although I had clean lines I lost time on the flatter sections of river, GoPro footage is a great tool for showing you where things go right and wrong!Tom and Gav put down good times, they were through in the top 32.Up next was the Boater X… four padders battle down the Stair Case, a break out half way down would throw a spanner in the works for many.Although starting in front, Tom and Gav ended up third in their sets… the top 2 go through.This only meant one thing, enjoy the rest of the river, endure the train ride back to camp two, get our heads down before the mass start race at 5pm.

Carnage is the only way to describe the mass start race!Ninety paddlers face upstream below the top dam until the whistle is blown… then it’s on!The 4km race is great fun if not a little painful at times, the top 25 paddlers would continue through the Window, past the 4km to the bottom take out.Due to the carnage and long slog, Tom and myself were’t too disappointed to see a few more than 25 paddlers ahead of us, Gav on the other hand made it to the 4km mark in the top 20! Great work Gav. This can be bitter sweet, on one had it’s awesome to be in that top group of padders, the down side is you then have to continue thrashing it out for the rest of the river!Gav finishes the mass start in around 16th… we think.

A great party at camp one ends the event with prize giving, an Austrian ska band, a local Czech ensemble, DJs and an arm wrestle comp!

Although our team had mixed results the event was fun! Well organised, competitive but most of all, inclusive. The river is quality… a mix of most grades, the rapid named Bloody Hand is arguably the most intimidating and lived up to its name during this four day paddling bonanza.If you’re thinking of entering an extreme race, or even just fancy four days of good boating check out the event, make a plan and get to Lipno.A huge thanks to the organisers and volunteers of the event, Andi Brunner took the crown for the men and Luci Souckova for the Women.

Personally a big thanks to Peak PS for continuing to provide quality, hard wearing paddling kit and Square Rock for providing me with the sporty Jackson Nirvana.