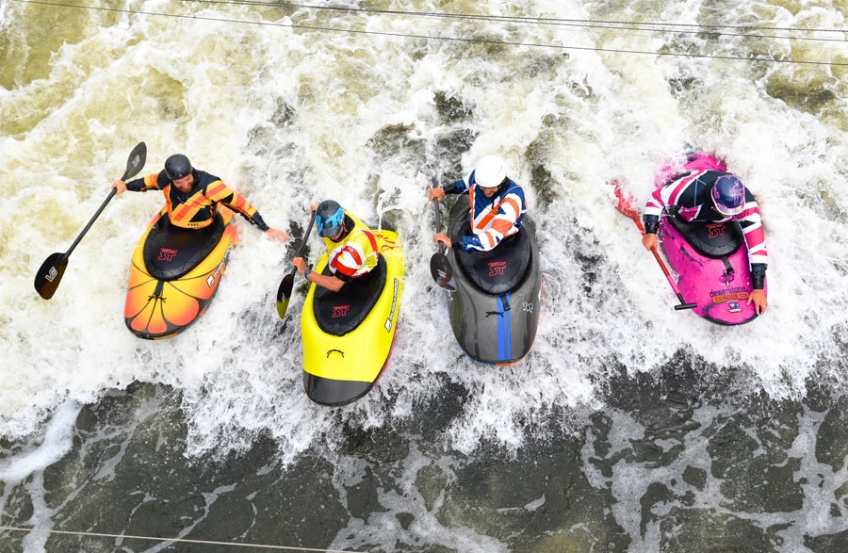 Our own Harry Price reports back from the exciting week of Freestyle paddling in Nottingham..

Last week the long anticipated 2022 Freestyle World Championships took placed in Nottingham, England. For freestyle kayakers the World championships, which take place every two years, are the top tier of competitive events. This was no exception, alongside the main competition new festival events such as world’s biggest loop, flatwater freestyle and a master's category was added for all paddlers from club level to world champions to take part in. In my opinion this new style of event was a great way to improve inclusivity for the public and has set a new gold standard for the future of freestyle competitions. 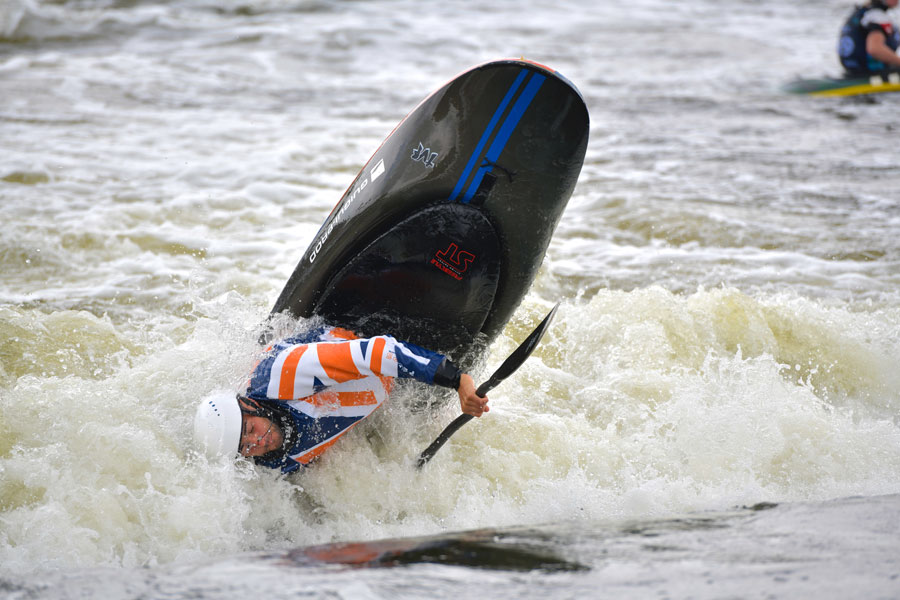 The competition took place in two locations: float boating where competitors aim to get their kayaks into the air and perform variations of front and back flips, took place in Twin waves. Twin is the second hole on Holme Pierrepoint Whitewater course, every hole trick and combination can be performed in the feature. However, setting up can be tricky and it is easy to flush if you end up in the wrong place. Squirt boating, where the aim is to perform graceful dance like routines as well as a mystery move took place in the top pool just a few meters above Twin. It was special to have the squirt boating spot so close to the float boat feature and made it particularly easy for people to spectate. 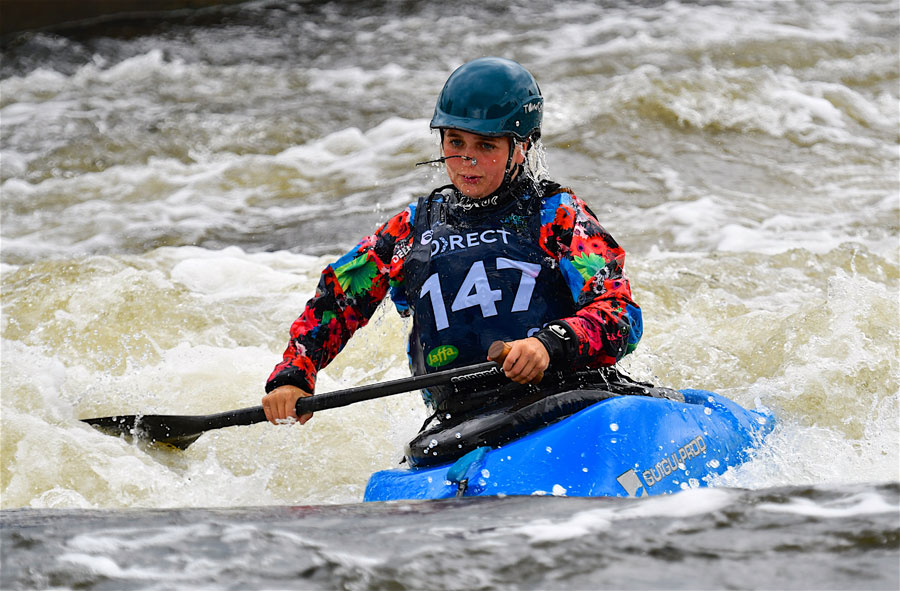 Day two began with the C1 women Semi Final. In a freestyle semi-final 10 athletes compete for the top 5 places to progress into the final. With a high standard of paddling all three British paddlers Ottie Robinson-Shaw, Tamsyn Mcconchie and Becky Green progressed through, alongside Beibhin Butler from Ireland and Anica Schacher from Germany. Through the prelims and semi-finals Ottilie Robinson-Shaw, took a commanding lead because of her huge range of tricks and excellent boat control. 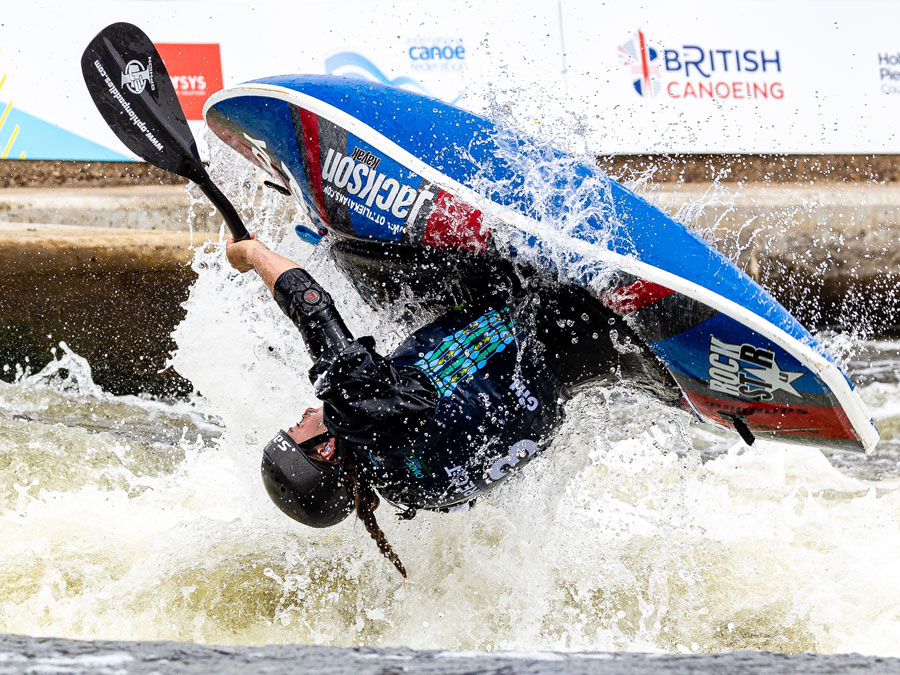 C1 was followed by men’s K1 preliminaries where sixty men fought to get into the top twenty to advance to the next round. All five of the British men made it into the quarter finals. Rob Crowe showed us all how it’s done with a gorgeous and stylish ride scoring 1686, the highest score of the competition. 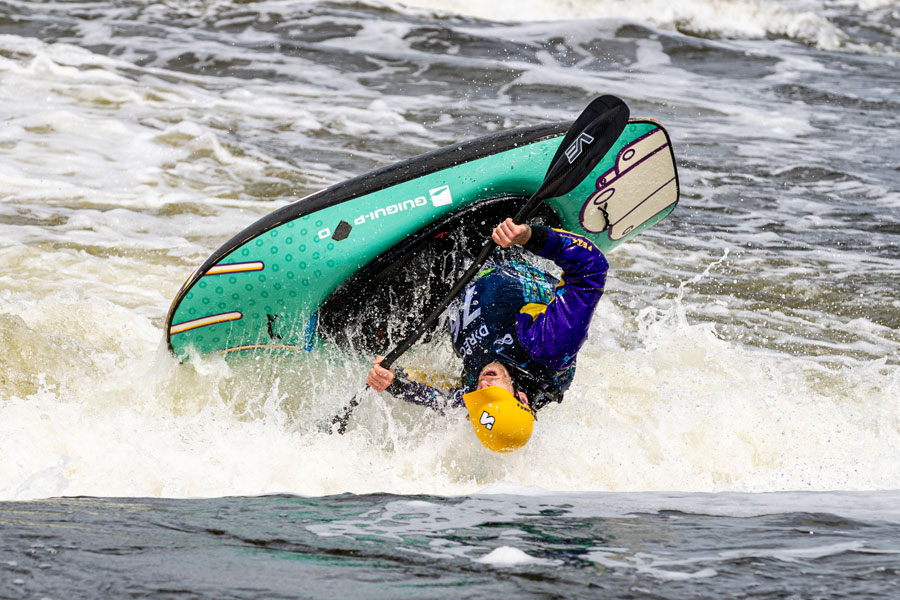 In the evening of day 2, squirt boat semi-finals commenced, in the ladies Ottie and Tamsyn went through into the final in 1st and 2nd. Tamsyn put together a fast-paced fluent flatwater routine which combined with a head under mystery move scored over 1000 points and would have secured her a place in the men’s final. Ottie had the Semi Final of her dreams, after an incredible first ride scoring 1446 Ottie came back for more. On her second ride she did over half her flat-water routine super clean, meaning she had her hands and paddle out of the water. This requires tremendous amounts of core strength plus skill and when she combined it with an impressive head under mystery move, she was rewarded with a score of 1920 points a new ICF world record and the highest score of the competition. To put it into perspective, multiple time world champion Clay Wright was scoring around 1400 points.

Part 2 of the report coming tomorrow...