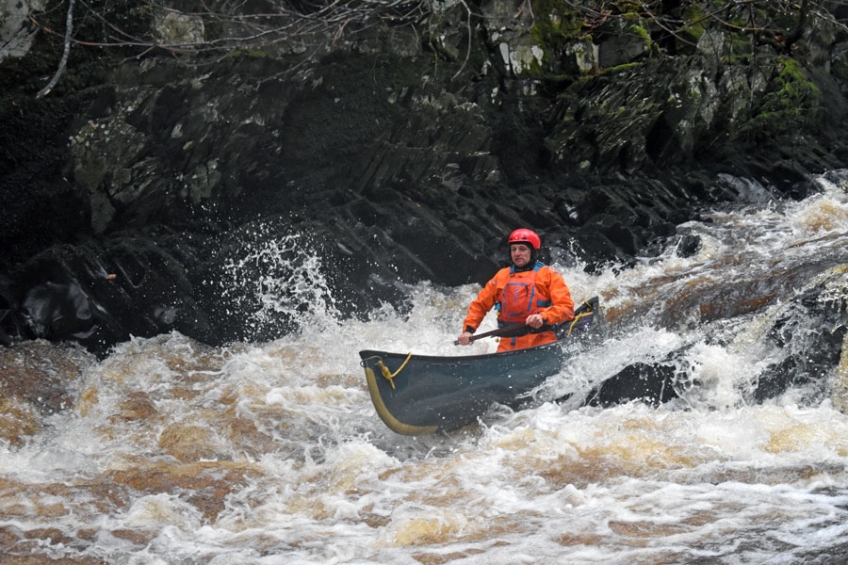 I know that lockdown has affected everyone is some way or another and the guidance can sometimes feel soul destroying. Thinking big picture, I know that paddle-sports should fall into insignificance, however I’m itching to get out paddling again as soon as possible – and I’m sure many of you feel the same. While the restrictions can be confusing, and different in Wales to England, my view is let’s stay out of the boats for now and look forward to getting back out there once the guidelines change and it’s safe to do so.

As with many other paddlers it has left me daydreaming. I’ve become a real believer in the notion that while I have to stay put, you can’t stop my mind from going where it likes. During the first lockdown this was daydreams of far-flung places and memories of previous trips; many hard drives were searched for nostalgic pictures. I wasn’t the only one, I really enjoyed the Instagram weekly throwbacks that people were posting of previous trips and tales of going big with things like waterfall Wednesday. However, this lockdown I’ve been going back to the two days of ‘staff training’ we did as a department where all the paddle-sport coaches at Plas y Brenin used to go out in boats to share ideas, check current practices and make sure there was no skill fade over lockdown. As a team, we’ve all missed it so much and we’re all itching to get back.

The first paddle that distracts me from reality is the day in sea kayaks. As a team we paddled around Puffin Island, not the most demanding of trips but given the time we had it was a terrific choice. Puffin Island is a small Island at the end of the Menai Straits, despite being very close to Anglesey, because of its location, it can be either benign, flat conditions or it can be fairly affected by the wind and tide. We chose to put on a little way along the mainland, this means you don’t have to pay the fees at Penmon Point and, provided you’ve got the tide right, you get to paddle past the wrecked boat that’s visible from the road.

This sunken boat provided quite a bit of entertainment for four keen paddlers that had been kept out of boats for four months. Fellow instructor James Bruton climbed out of his kayak and clambered aboard the sunken boat – asking which way up it was, much to our the amusement. This led to months of people asking which is the top and which is the bottom of their kayaks or canoes (sorry James).

Once at the end of the straits the short crossing to Puffin Island and the Beacon (looks like a lighthouse) comes into view. This small crossing again can either be completely flat and straightforward or can produce surfable waves when wind over tide is encountered. We were lucky enough (I say lucky, Adam had done enough planning to know exactly what conditions we’d experience) to have surfable waves but nothing lumpy enough to make the crossing feel like hard work. The further you travel away from Anglesey, towards the end of Puffin Island with its inaccessible, cliff covered coast line, the more remote it feels (it’s not, it’s the traveling away from the road and carpark that gives this feel). Although it feels remote you’re not all that far away from your start point, but it still requires planning as you can have an exciting day there with the wrong wind and sea state.

The end of the island is often home to seals, not just one or two of them, we were possibly paddling among twenty or thirty of them. One or two seals is always a pleasure to see, as this was, but paddling alongside that many was eye opening. The return part of the journey saw us paddling along a shoreline that’s covered in cliffs and the odd cave, these cliffs are home to lots of the island’s bird life including countless Guillemots, Razorbills, Shags and now the odd Puffin. We were lucky enough to see most of these.

When the conditions are calm all the wildlife and sense of adventure means it’s one of those trips where the journey doesn’t need interruption. I had one of these days with a group a few years before, right up to the point where the nesting birds, Guillemots I think, took exception to what I think was a Shag. The Guillemots chased the Shag off the cliffs and over our heads before hunting it down above us – all over us in fact, poor thing! This can’t have been what Slayer were singing about in their song raining blood… Thankfully, nothing quite so dark this time, just an amazing scenic paddle with lots of wildlife and good banter.

Another day I think back to was the day of staff training in Canoes on the Upper Conwy. The Idea here was that we look at facilitating leadership learning using the advanced descriptions from British Canoeing’s new leadership awards and create discussions and thought processes based on leading each other in the environment. The Upper Conwy gets an overall technical grade of three with one rapid that goes at grade four, a lot of this changes with different water levels but this was fairly spot on for the day we were after and the day we had. Water-level wise I would have put it at a low but still paddleable, this would translate to floatable, just, without scraping boats on rocks. First thing of note was the temperature, our day out at Puffin Island was in July and was warm. We were in shorts and single thermals under our touring cags. This day on the Conwy was bitterly cold, many thermals under dry suits were worn and there was even the odd pair of neoprene gloves coming out.

The upper Conwy has an amazing gorge feel to it, steep slate sidewalls, lush greens of the trees, mosses and lichens and the strong brick brown hue from the peat catchment areas make this river really special. You get the feeling of remoteness even though the road is right next to you. And just because it’s next to the river doesn’t mean it’s easy to get in and out of. The river itself is a mix of shingle bed rapids combined with slate bedrock - this mix means that line of sight can vanish easily and finding eddies to stop in, especially with four canoes, can be tricky. Having said all that, it was amazing to see the whole department performing at such a high level, especially as canoeing might not be the chosen discipline for one or two of them. By that I mean they enjoy canoeing but if you gave them the choice of canoes or kayaks I reckon they’d choose kayaks.

The main event on this river, a zigzagging, steep, grade four with a tricky portage if you’re not keen became a discussion point. We chatted around the ins and outs of balancing group management and trespass issues and what we’d expect to see at a leadership assessment in this environment and what should go into a training session. I went first and set up safety at the bottom, wasn’t needed as everyone was on form and styling. On reflection I paddle lefty a bit too much, I’m going to do a bit more on my right side as my own personal action points.

Two thoroughly enjoyable days with colleagues that I miss and can’t wait to return to! There are now plans a foot to go out paddle-boarding, surfing maybe, and white water kayaking as our next days of ‘staff training’. Days like these are why I love my job so much. Just waiting for the restrictions to be lifted and then we can get back to “our office”…