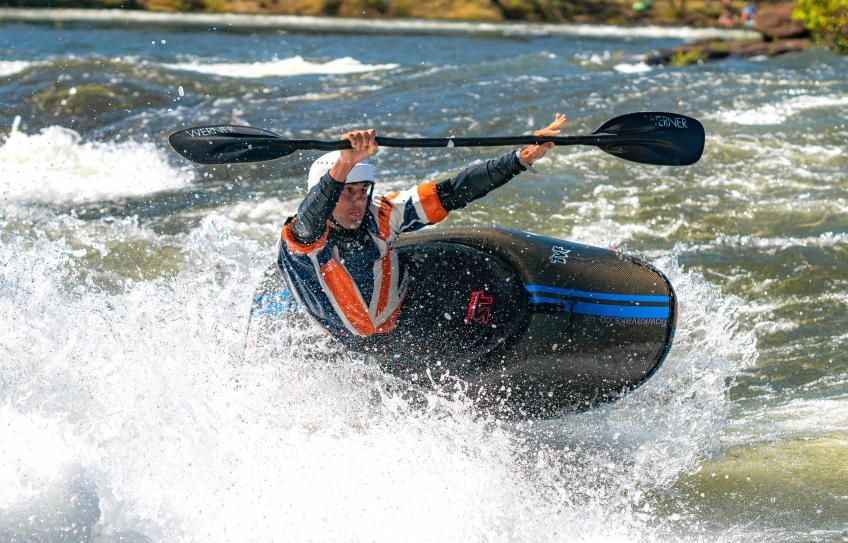 2022 ICF world cups. Big tricks, stylish rides, excitement and a little heart break. At the begging of October the World Cups began in Columbus city on a stretch of the Chattahoochee river. The Chattahoochee has multiple world class play spots which run throughout the year at a variety of river levels, making it an exciting destination to travel to and compete at. This years two World Cups took place in Columbus.

World Cup one took place on small wave hole called Ambush. A long green flat ramp, with two shoulders and a forgiving foam pile meant that almost every trick in the book was possible. However, you had to be precise and snappy to make sure you stayed in the feature. It isn’t often that we get to compete on a feature that allows wave and hole tricks. This competition wasn’t just about who was faster trick to trick, it was a battle of styles and tactics. Explosive wave tricks from the US, Canadian and Finnish paddlers were going head to head with dialled in hole tricks from the Irish and British paddlers.

In the Junior ladies category Makinley Kate a young paddler from the US, threw blunts, loops and a textbook Mcnasty proving that she can do the wave and hole tricks. Makinley’s detailed understanding of the feature combined with an ability to do technical tricks; meant she took a well-deserved 1st place.

The junior mens final was the most diverse with athletes from Finland, New Zealand, the USA and Japan. Nanase Okazaki from Japan dominated the competition with mind blowing explosive tricks such as clean blunt Mcnastics. It was exciting to watch Nanase throw tricks that very few people can do. Nanase is determined and driven, I’m looking forward to seeing where he takes his paddling in the future. Coming in second was Onni Eronen, a Finnish junior with beautiful wave and hole tricks. Onni left it until his last 5 seconds to score a textbook blunt Mcnasty which doubled his score securing himself a silver medal.

I was stoked to make my first international final in C1 during the Ambush world cup and finish in 4th place. Dane Jackson took gold with an impressive style mostly consisting of wave tricks. Dane ticked off all the blunts as well as Pan-Ams and pistol flips. In the ladies C1, GB’s Ottilie Robinson-Shaw scored big rides and a gold with huge loops and mcnasties. Sophie Gilfillan a Canadian junior threw back blunts and showed impressive boat control to take second place.

Through the senior mens competition there was constant movement on the leader board, as 20 top international paddlers battled it out to move through the rounds. The one exception to this was Mason Hargrove a young local paddler who managed to maintain his spot at the top throughout. Mason was not only quick trick to trick but was scoring the big tricks such as Pan-Ams and blunt mcnasties. In the finals Mason put down a huge ride over 1500 points to take gold. Masons ride featured a combination of the highest scoring hole and wave tricks. This proved that to win in a feature like this you needed to be skilled in wave and hole boating. Other highlights for me included watching GB Peak paddler Gavin Barker make the mens final and Visa Rahkola from Finland take second place. The Finnish team are stronger than ever, it is so exciting to see them winning international medals.

The senior ladies competition was a battle of tactics and style which was really fun to watch. Hitomi Takaku from Japan threw big airscrews and quickly racked up points with lots of the smaller scoring wave tricks. Ottilie took a completely different approach and went big straight out the gate with the best entry 3s off the entire competition. Ottilie combined her high scoring entry with mcnasties and huge back panams. In the end Ottilie took the win in one of the closest and most exciting senior ladies finals I have watched.In summary the first world cup was a success and was extremely exciting because of the combination of wave and hole paddling. A huge thank you to Columbus city, Whitewater Express and all the key organisers and volunteers that created such a high standard fun freestyle competition.