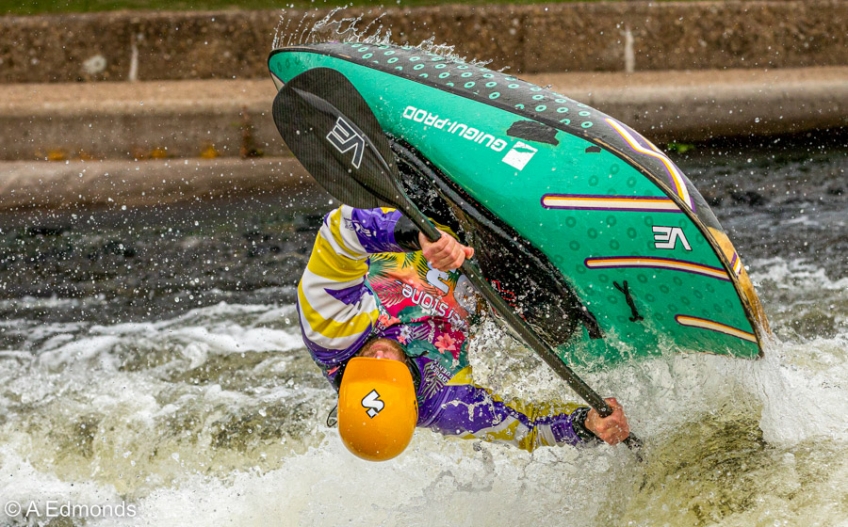 The first weekend of September saw the welcome return of The Euro Open to HPP. The brain child of Peak UK team paddler James Ibbotson and a reimagining of the former British Club Champs, it's an event which has been sorely missed the last two years due the pandemic. The whole British Freestyle community had already come together once this summer, to support the GB team at the home World Champs, but this time round everyone was going to be out there getting wet on the water.

The event sees paddlers compete in various events across the weekend, with points on offer for each one in the battle between clubs to be crowned British Club Champions. Saturday was freestyle day, ultimately crowning the British Champions, and after a quick briefing the jam session heats began. The novice paddlers were taking on Jaw and the Inters and Experts competing on Troll Hole. It seemed like everyone had a fun morning with multiple intentional out of boat experiences occurring in the Novice event for crowd pleasing bonuses adding extra spice to the Troll hole heats, as there were a few boats to dodge mid ride. The vibe on the bank was also great with crowds of people lining the banks at both features all morning and lots of familiar faces to catch up with.

Lunch time saw the British Champions in Squirt boating crowned with the powerhouse squirt couple of Dave Rogers and Tamsyn McConchie taking home the Euro Open and Brit Champ titles. It was great to see how the squirt boat community is growing again at HPP, with entries at the highest they have been in years and a lot of people giving it a go for the first time.

As we moved into the early evening the top five from each float boat category were taken through into an ICF style final showdown of 3 rides best 1 counts. There was some serious strength in depth in the finals with lots of the GB team members competing and also a strong contingent of our friends from over the Irish Sea. In the Juniors both Niamh Macken and Ben Higson followed up their strong Silver Medal performances at the Worlds, with Niamh proving she is fast becoming the Junior Lady to beat and Ben pulling out an impressive last ride and showing that he's definitely got what it takes to keep us older members of the team looking over our shoulders when he steps up to the men's next year. Next up were the C1 finals, another event where like Squirt participation is on the up. Lowri Davies carried out the impressive feat of taking the Brit Champs win on her C1 debut in the women's but Ireland's Beibhin Butler dominated to take the overall Euro Open Crown. In the men's Ibbo managed to hold off the charge of fellow former slalom padder and crowd favourite Eoghan Kelly and Peak UK team member and recent C1 convert Harry Price to take another Brit Champs / Euro Open title. Into the seniors and in the women's Lowri managed to pull off the Brit Champs double of K1 and C1 champion. The men's final was a stacked affair with 3 of the finalist from the recent World Champs going up for glory. In the end Dave McClure took the Euro Open title, with an impressive ride which feature a flush followed by Dave's trademark ability to keep throwing move after move without stopping or setting up. Due to our Euro Open Champ being Irish this meant that the British Champion title fell on to Harry Price who finished second after laying down the most composed ride of the evening nailing text book trick after textbook trick without any flushing.

With the freestyle results announced it was now time to party! The fresh woodfired pizza's on offer tasted as good as they smelt I'm told and the guys from River Legacy once again took on the valiant task of refreshing paddlers after a long day on the water. This involved an interesting combo of local real ale and sourz shots. Jake Boswell and Pete McColl of Flow Kayaks were once again on the decks and kept the tunes going all night drawing a good crowd until kick out time. The evening definitely felt like a welcome return to kayak parties of old with some questionable shapes being thrown on the dance floor, a few folk a little worse for wear and somehow no injuries from a spate of botched dirty dancing lifts.

Sunday saw the Boater X, SUP X, Biggest Pop out and the most anticipated Inflatable events taking place. The boater X is always good fun and though there were a couple of sparce heats, presumably due to sore heads, there was some pretty close racing with the freestylers giving it their best shot up against the couple of slalom paddlers on show. Special mention has to go to men's overall winner Zac Allin for snapping his paddle on the start line and still winning his first round heat comfortably. I have to confess I was on the water when the SUP X took place so didn't see it, but as with the squirt boating there was a good turn out made up of a mixture of locals from the fast growing HPP community and novices giving it a first time try. The biggest pop out may not have had great number of competitors but I did witness the coolest thing of the weekend as young up and comer James Ward threw a gigantic loop in a Jackson Antix, styling it out with at least a clear foot of air between the tail of the boat in inlet gate as he was throwing through, mighty impressive!

Finally the Inflatables, the mass start race always brings carnage with competitors ending up in all kinds of places. I missed watching the start but as I walked down the course there was somehow still a large unicorn with three riders in the top pool whilst the head of the race was nearing the bottom of the course, an unruly beast it mush have been. This was followed by the Inflatable Freestyle where competitors jump one after the other into the bridge section looking to first maintain a surf in a feature and once this is achieved throw their best tricks. Special should out's must go to eventual first and second place finishers Liam Robson and Paul Gill, the later managing spins in Troll Hole on his well trained turtle and the former managing an impressive kneeling no hands surf on an unruly manta ray which seem to last an eternity.

The Euro Open then drew to a close with the final prize giving and the crowning of the British Club Champs. This is an event that has been dominated by the Lee Valley Paddlers Club for years now so it was nice to see a change up for the books with a victory for the locals Holme Pierrepont Canoe Club.

Another year over and another success I would say. It was so good to see everyone in the community all together and out on the water for the first time since the pandemic. A massive should out has to go to Ibbo and his volunteers for putting on such an awesome, friendly and fun event, which feel like it's certainly gathering momentum year on year.