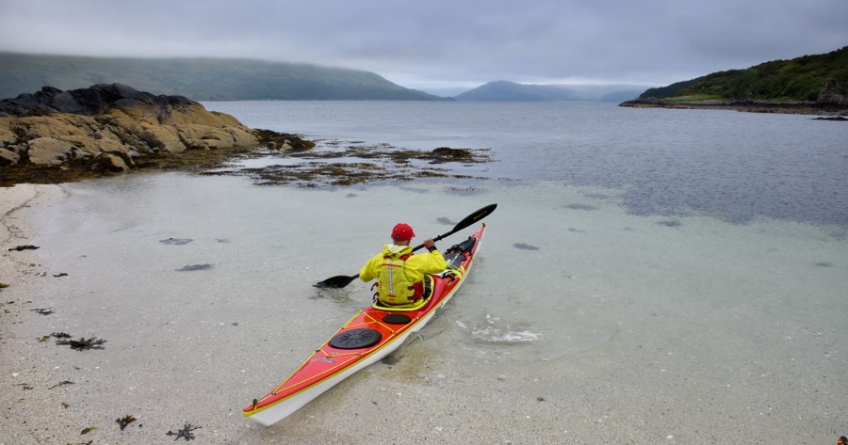 A Paddle with Pete...

It started with a phone call in February, Pete super busy at work keeping Peak PS ahead of the game and us both realising due to covid, life and so many other things it was an age since we last went paddling together. Over the years we have had lots of paddling adventures together, in my words they started as ‘brilliant’, progressed to ‘proper brilliant’ and now our days on the water have become established as ‘proper bloody brilliant’ adventures – it was time for us to have another one! "If you don’t get a date in the diary, it will never happen.." – so from that February conversation and date in July was set and firmly written in the diary was ‘Doug & Pete’s PBB Adventure’. 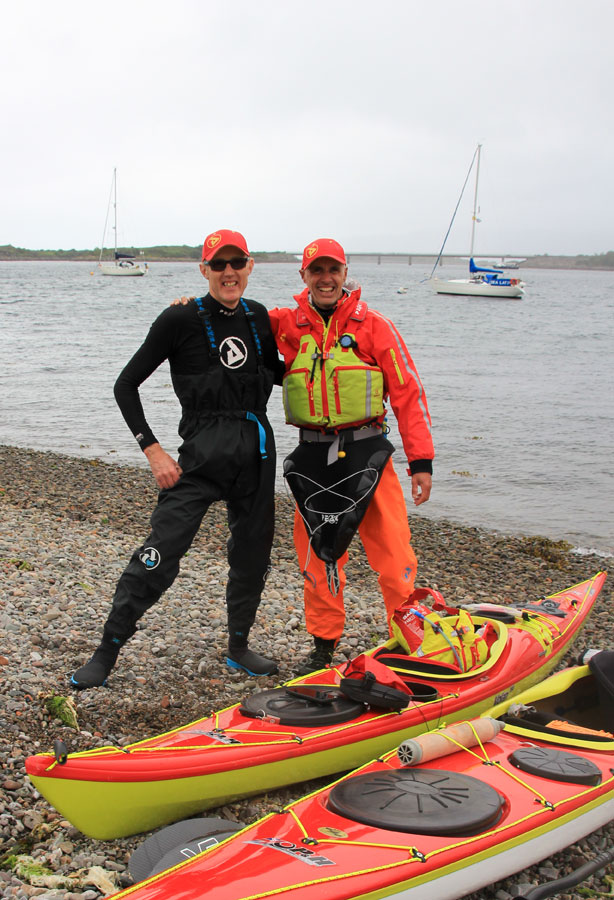 Doug and Pete set out on yet another PBB Adventure

As the diary date approached a plan was required – it was decided that all we wanted to do was load the boats and head off with the sole objective of escaping from it all and spending quality time in an environment we both love. How far we went or what we achieved did not matter; paddling, camping, eating and enjoying just being away from it all was what mattered. It was with this open plan in place that we found ourselves at Kyleakin, overlooked by the Skye bridge on a windy day in July. Boats were loaded, destination was unknown… 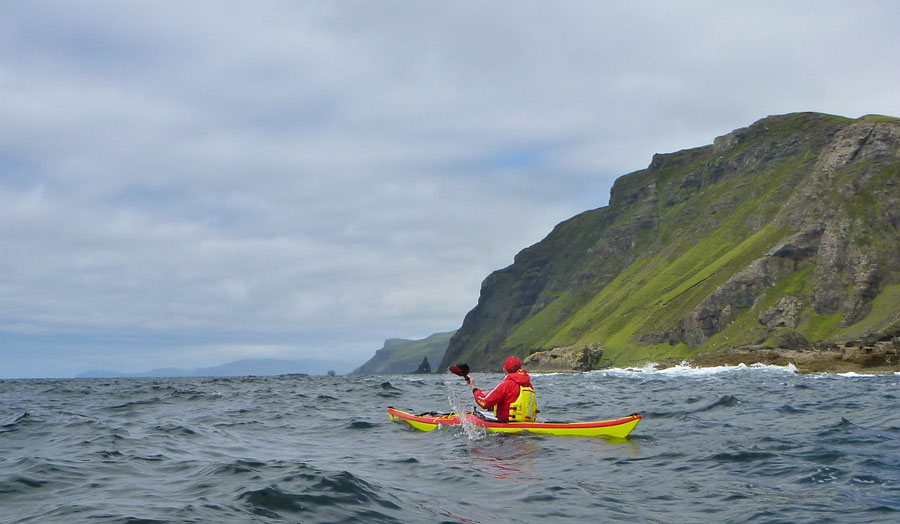 Day One – Going with the tide

It only takes a few paddle strokes to start a journey and quickly feel the complexities of work disappear and the simplicity of expedition life begin. We had wind at our tail and were heading towards the infamous tidal stretch of water know as Kyle Rhea, where we knew we would then have a moving water conveyer belt to whisk us on our way. Our journey had begun and the simple expedition paddling life was enveloping us – Skye’s dramatic landscape wrapping around and smothering us with its beauty. For those who’ve paddled with Pete before you will know he has one speed – fast with high cadence. I was well used to this, however on this trip I discovered there was another ‘Pete speed’, only seen when he’s been kept away from the water for too long and over excited – extremely fast with even higher cadence! After an hour of hanging onto his over excited shirt tails he finally slowed, saying “phew I’m a bit overheated, have I been paddling a bit fast??!!”. Wind and tide saw us arrive at the beautiful Sandaig Islands; here we settled down to enjoy a beautiful camp with the dramatic passing showers constantly missing us and the sun lighting up the beach we were camped by – a perfect start to our PBB Adventure.

The weather forecast for our trip was always a bit marginal, some would say very ‘Scottish’. So, setting off in the dry with a light breeze was a bonus, only to be quickly replaced with a reality of 18km into a moderate headwind with steady drizzle to wash the salt off the face. Knowing a stop at Armadale would allow a ‘coffee and chips’ treat we embraced the conditions, chatting and joking our way up the Sound of Sleat. Leaving Armadale the beautiful beach at the Point of Sleat was the next objective, the headwind ever present but the drizzle dying out. Camping at the beach was an option, but after 28km into the wind we decided we’d earnt a bit of a tail wind, so we continued round the point to camp further on – this time with wind at our tails. It is these ‘let’s go on a bit further’ moments that so often offer so much – this time it was no exception as we passed dolphins and sea eagles on route to the campsite. 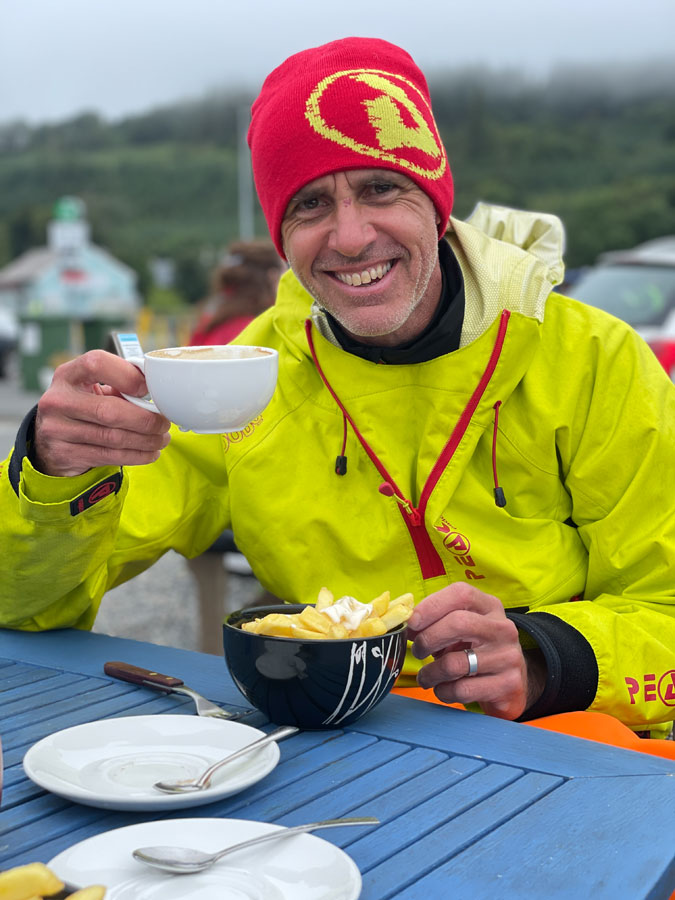 Day Three – Rain, fog, wind and sun; a tough day on the water.

It had been a wet night and the morning was showing no sign of change, in Scottish terms it had definitely moved from ‘dreich’ to ‘drookit’! When asking Pete what he fancied for the day his ever cheery answer came back, well it’s raining so we might as well go paddling - so paddle we did. The paddle took us on a 5km crossing to the Strathaird peninsula, however the fog, rain and solid force 5 head wind and sea state were certainly not going to make it easy. Sorting out the compass bearing for the crossing Pete was glad (in hindsight) we opted for my bearing and not his – his would have taken us to the Hebrides! It was a fairly bedraggled Pete & Doug that landed at the end of the crossing; rain in face and waves down neck were the order of the previous 5 km, with the fog preventing any sight of land for the majority. The rain finally cleared, the sun appeared and the mighty Cuillin mountains came into view. Psychologically things were looking good, but with the wind increasing to force 6 it was not looking so promising physically. Over a coffee in Elgol we decided to head for shelter at the head of Loch Scavaig. To say it was a bit of a battle to paddle there would be an understatement, but sat in the sunshine in camp that evening having had a wash in the stream the benefit of hindsight made it all worth it – we think! 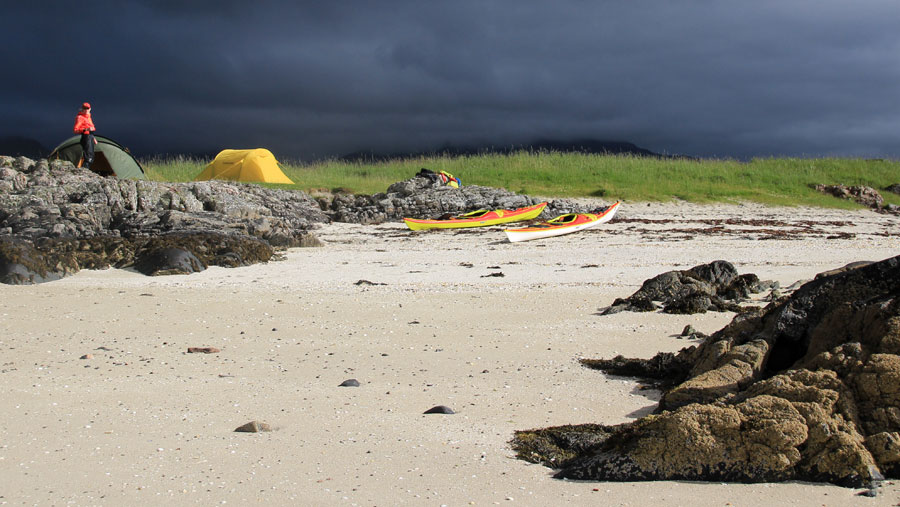 The plan had always been to arrive on the west coast of Skye when a small weather window was forecast, so sat looking towards the huge cliffs of Talisker in dry weather and light winds was amazing. We were at the entrance to Loch Brittle and knowing this was a committing section of coastline it was relief to get phone signal, a chance for a weather forecast was my plan. Pete was keen to touch base with family, so I looked after the boats as he headed up a small hill for a good signal. On his return he confirmed the signal was good, had chatted to family and posted on Facebook. When I asked him about the weather forecast the answer was, “oh I forgot, I’m sure it will be OK though!", so we headed off…. The mighty west coast cliffs soon towered above and four sea eagles were circling and watching as we entered their kingdom. On route to Talisker Bay and our campsite Pete got his only ‘red card’ of the trip, when identifying ‘steak stack’ as the rock feature we were heading to. To be mentioning such food so early in a trip is always a sending off offence, but it didn’t stop him drooling over steak stack for the next 10 km’s! 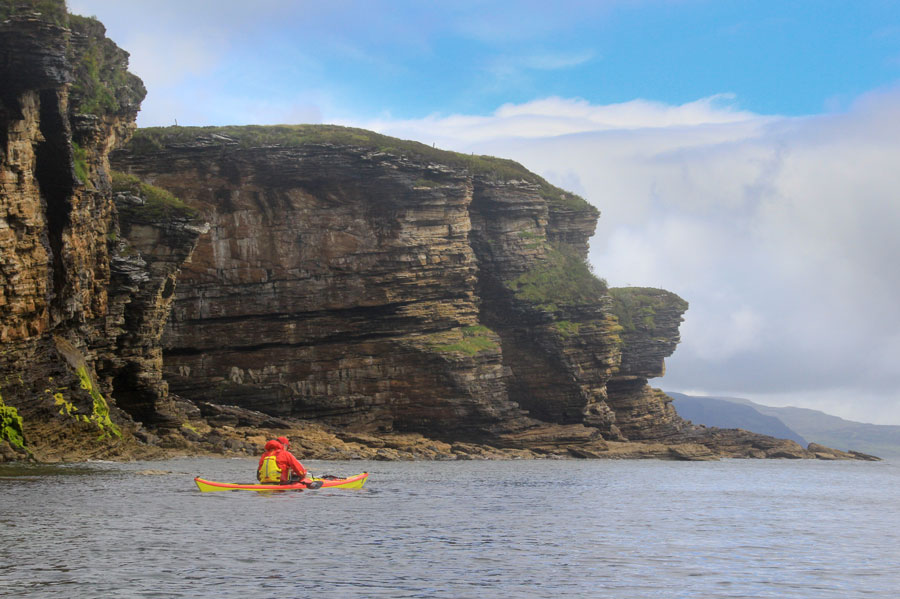 We woke to fog and drizzle again, but soon we had arrived at Loch Bracadale, an area of relative shelter before the cliffs of the west coast continue to Neist Point. We should have been enjoying the forecasted weather window, however with the wind now blowing force five something was amiss. At that point the VHF weather forecast came through, something we’d not been able to get for a few days. Listening intently, it became apparent the theme was force 5-7 winds for the next three days, so much for the weather window – plans needed to change. We decided to spend the day exploring the islands and beaches of Loch Bracadale, ending up on a stunning campsite, out of the wind and it was actually warm and sunny for the first time. An evening of chatting and watching the sun set followed, it was just what we’d come on the trip for and life was as simple as it could be, bliss.

The morning was dry, sunny and warm despite the strong winds; we had a leisurely start, thus meaning Pete had plenty of time to plan his boat pack. Getting everything in a sea kayak quickly and effectively is always a bit of a mystery for poor old Pete; however on this final morning he well and truly nailed it. I didn’t have the heart to draw to his attention it was half the amount of kit he’d started with as we’d eaten all the food! 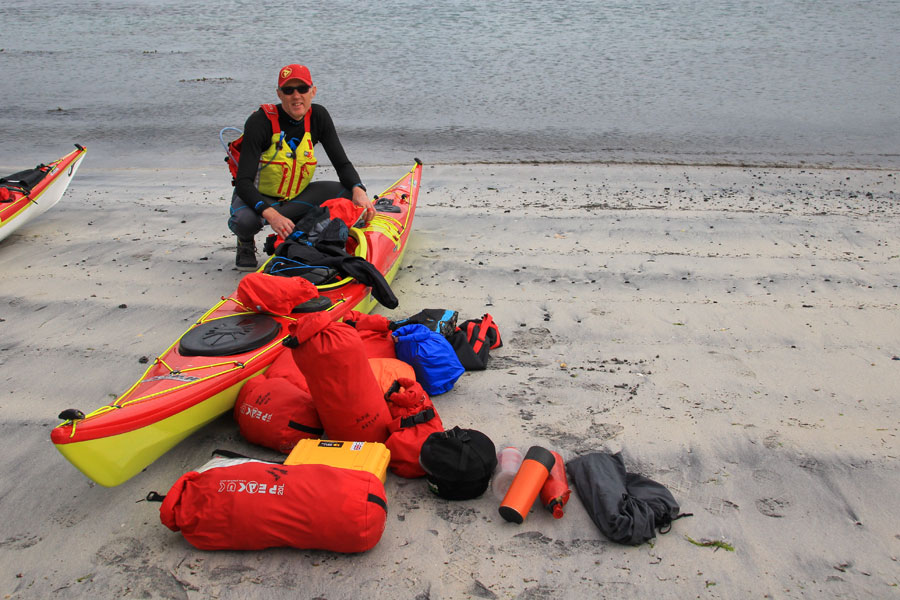 With the wind and weather preventing safe onward exploration of the west coast it was time to run for shelter, and as luck would have it I knew a pub nearby for our evening objective. As we approached the pub at Carbost we found a perfect campsite; grass to camp, waterfall to wash under, all with views of the Cuillins and a pub – perfect! Spring tides were a few days away and the grass was dry and clean, we pitched our tents at our waterside oasis quickly. A few hours later our waterside oasis started to become an ensuite bath for Pete as the tide was lapping at his tent door. By good judgement (or luck?), my tent was clear of the water, but to avoid an early bath we quickly moved Pete’s tent to higher ground before heading to the pub – lucky we didn’t rush to the pub too early and return to a soggy tent. 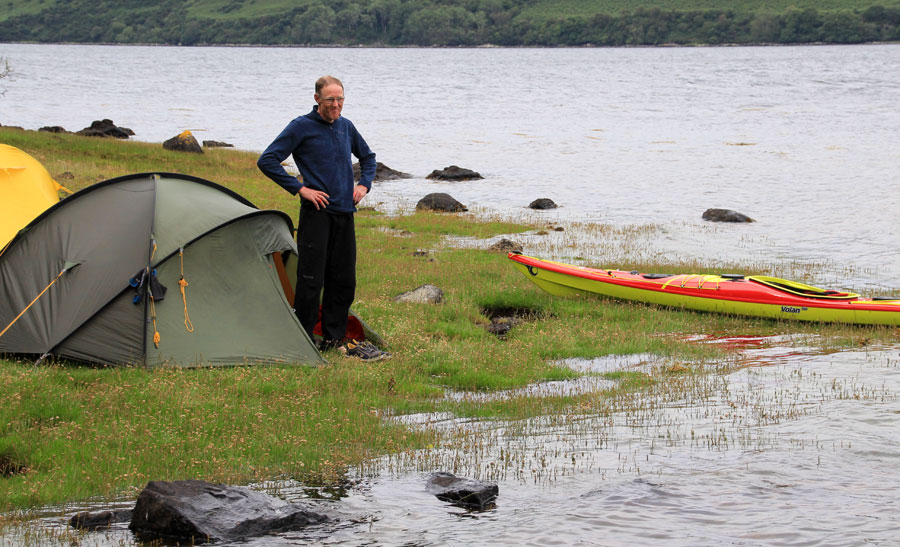 We decided our trip was to finish at Carbost the next day due to the weather, so it seemed fitting to go for our final meal in the pub. We dressed in our best going out clothes, putting paddling kit on top. At this pub you can land in the pub garden and in Pete’s words, take off paddling kit to reveal pub kit in true ‘James Bond style’. The isolation of the trip was clearly getting to him – so defo time for a pint and to plan our next PBB Adventure… 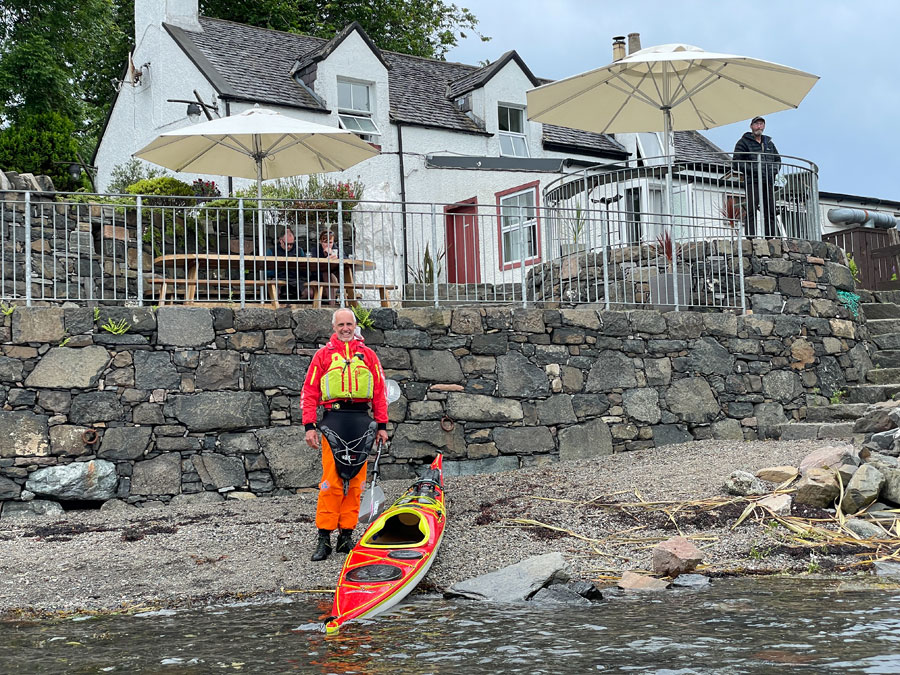 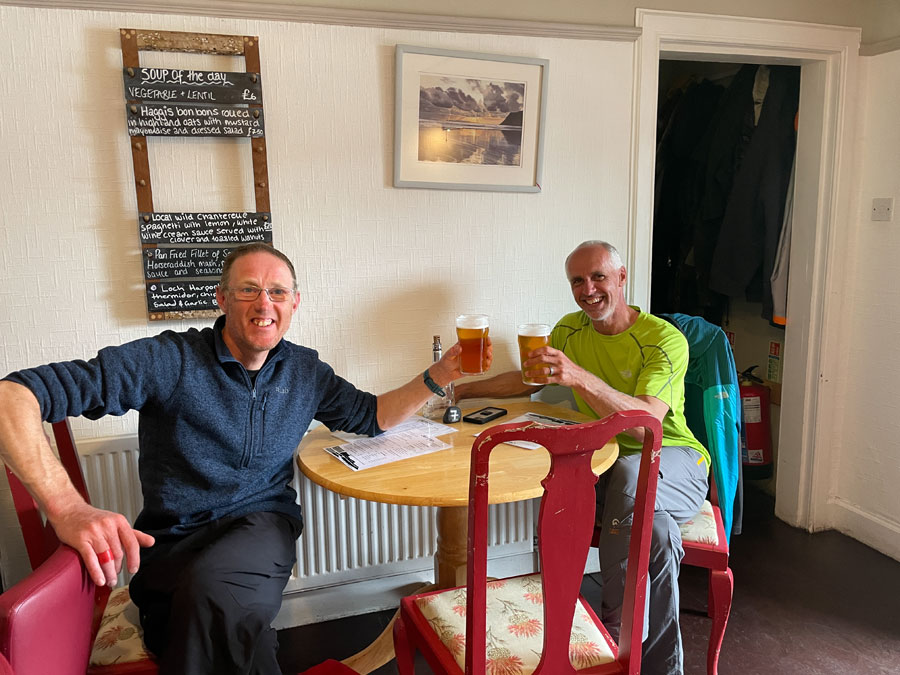