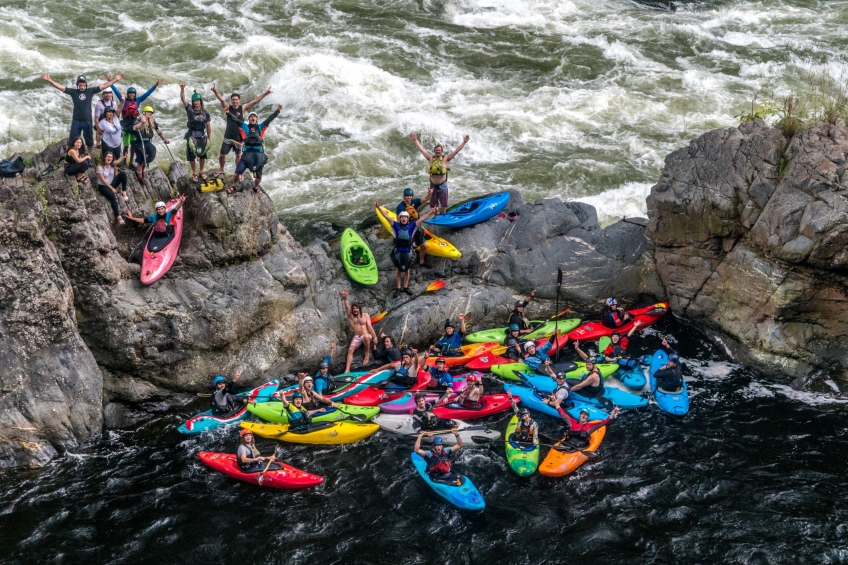 After a 40 hour journey on 3 planes, and an 8 hours in a small bus we arrived (minus our kayaks no thanks to China Southern) in the middle of the dense jungle in the heart of Sumatra. In this small village by the river, hours away from the nearest town, is where the Asahan River Festival was going to take place. We settled into our cute green house in the village and got acclimatise to the hot weather and local beer.

The next morning we would head up to the put-in in the back of a pick up truck with the other competitors that had flown in from all over the world. The Asahan River flows from the legendary Toba Caldera, which is a lake formed from the only super volcano to have erupted in human history. From here it starts its short but wild journey to the sea and offers an exciting 30km stretch of big volume, class III – V white water. Putting on we were impressed by the size of the rapids and how much fun they were to navigate, avoiding the big holes and hitting air off the sizable waves. This river was a lot of fun. Monkeys frequented the trees on the shore and big, exotic birds, of which I’d never seen before flew past and made some impressive sounds.

As the days went on the festival ramped up with morning yoga classes, all day kayaking to dial in those race lines, waterfall hikes and evening massage’s with a local masseuse. Life was simple living out in the jungle and we could really focus on getting to know the river. The race format was to be an elite and intermediate race with both a sprint and endurance race in both categories. The intermediate race was held on the class III sections of the river while the elite were held on the more chunky sections of class V. The endurance race for the elite was held over a 4km distance with one of the tougher rapids at the start, Rabbit Hole, which flowed into a section, which was aptly named Land of the Giants. The intermediate races started just downstream of the Land of the Giants and was a great race to watch which included some of the local Indonesian kayakers holding their own on their home turf.

The Sprint event for the elite was held on a section of the river named the Nightmare Section. The race covered two rapids that flowed pretty much continuously, which make the stakes even higher, mess up on the first move and you could find yourself in a spot of bother for the rest of the run. The standard of racing was high and it didn’t really come as a surprise when it was announced that Nouria Newman had not only won the female category in both races but she also beat all the men in the sprint race! The overall Elite results were as follows:

Words don’t really do the river, community or jungle the justice it deserves so check out the photos!