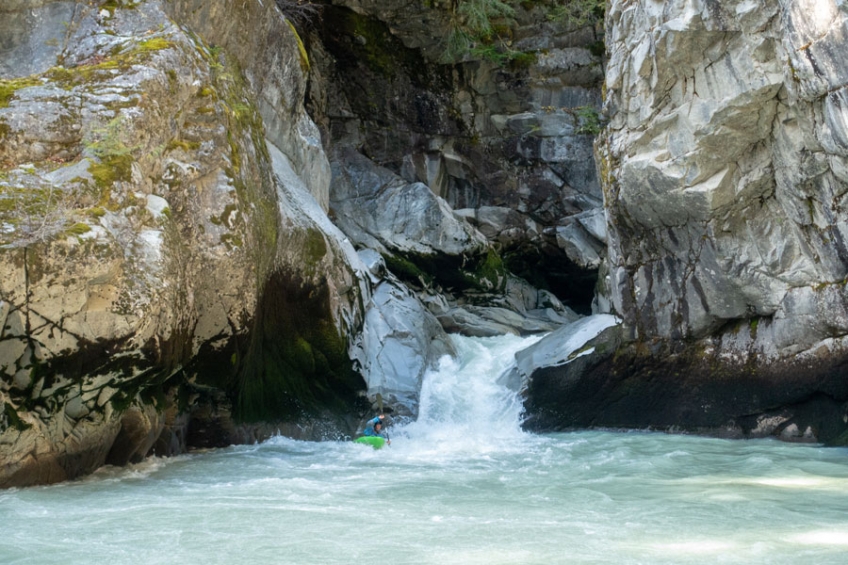 Upper reaches of the Squamish? Drone scouting has transformed the ability to scout sections of whitewater that previously have been hard to get to. In November last year, Rapha Boudrealt-Simard took his drone up to the upper reaches of the Squamish River to see what lay deep inside the multiple canyons above the normal put in. What was visible on the drone was some very enticing looking whitewater and a gorge we named ‘gnar gnar’ - a previously attempted gorge of, for the most part, unrunable rapids. In early October 2019, a team of six; Rapha Boudrealt-Simard, Nouria Newman, Kiah Schaepe, Rich Kemble, Jen Chrimes and Russell Henry, put on the upper reaches in hope of finding some run able whitewater. They were not disappointed when they found, between the insane geology, an array of clean drops and boulder garden style rapids. Of course there were the inevitable portages when the river disappeared under a boulder or a drop landed on rocks. Progress was slow due to the nature of the steep canyon walls and making sure they could always find an egress should they need to abort. The team completed the first two of the three short canyons on day one, leaving boats by the river to hike back in to complete the final gorge the following day. Decent drops and nice boofs scattered the start of the last canyon and the team made much faster progress on day 2, taking down over a km of rapids in a matter of hours. That was until they reached a few back-to-back rapids that needed to be portaged but the nature of the canyon would make exiting and entering difficult. No matter how much scouting was done, the manoeuvre required to avoid a siphon wasn’t a guaranteed success. The group decided to hike out while daylight was on their side. This would leave some run able class IV and a couple of nice drops unrun. Well you have to leave something to go back for, right?