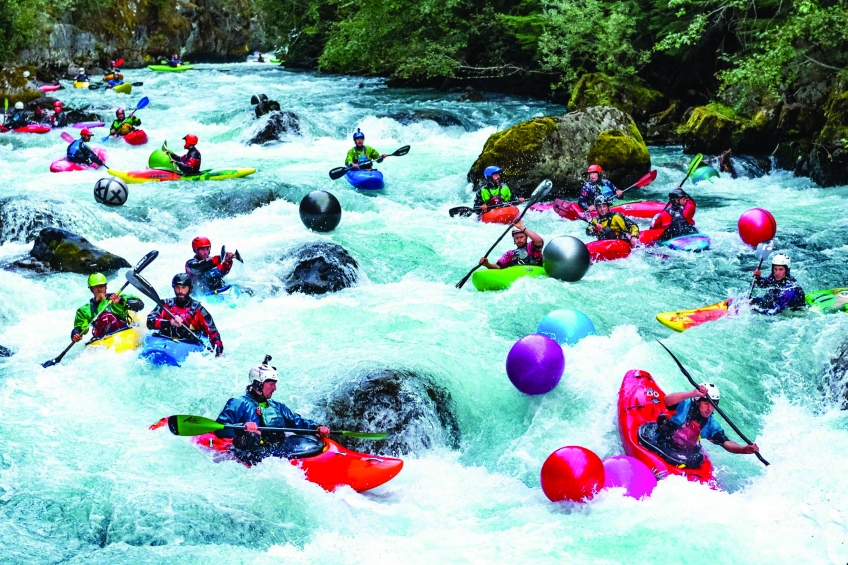 The Cheakamus Pinball race is probably the most competitive, fun and strategic race on the BC calendar, and also probably one of the best attended. Teams of three have to navigate the class IV upper Cheakamus River while guiding their large exercise ball successfully through the rapids towards the finish. Easy, one would think. Not so.

This race is all about sabotage. It’s not my first Rodeo, and through my experience of competing in the previous 2 years of Pinball I have learnt many tactics to steer my ball towards glorious success. Last year I left my paddles unattended while I helped with some of the event organisation. As I seal launched in above the first waterfall it became apparent that sabotage had begun before the race even had, a thick layer of coconut oil was covering the shaft of my paddle making it virtually impossible to hold any kind of stroke as I approached the must-boof falls. This is the kind of camaraderie this event provokes.

This year 60 competitors turned up to form 20 teams. It is a mass start race. The balls are released into the river above the crux of the run, a rapid called triple drop, which as the name suggests falls over 3 drops with burly boils and sticky holes. 60 people squeezing through the river at its narrowest point while a collection of large exercise balls fall from the sky is quite the scene - add to that some kayakers getting surfed, loosing paddles and swimming, it really is a sight to behold.

If you make it through triple drop and manage to reconvene with your team and find your coloured ball, then you’re off to a great start. The sabotage continues down the river with balls getting stuck in holes, micro eddies and the shrubbery and trees that line the river banks. Making it to the finish line uninjured, in your kayak, paddle and with your team and ball is quite the achievement and something to walk away feeling quite proud of.

The event is wrapped up in the forest with a traditional Canadian kayak party, barefoot, in the dirt dancing to some intense tunes.