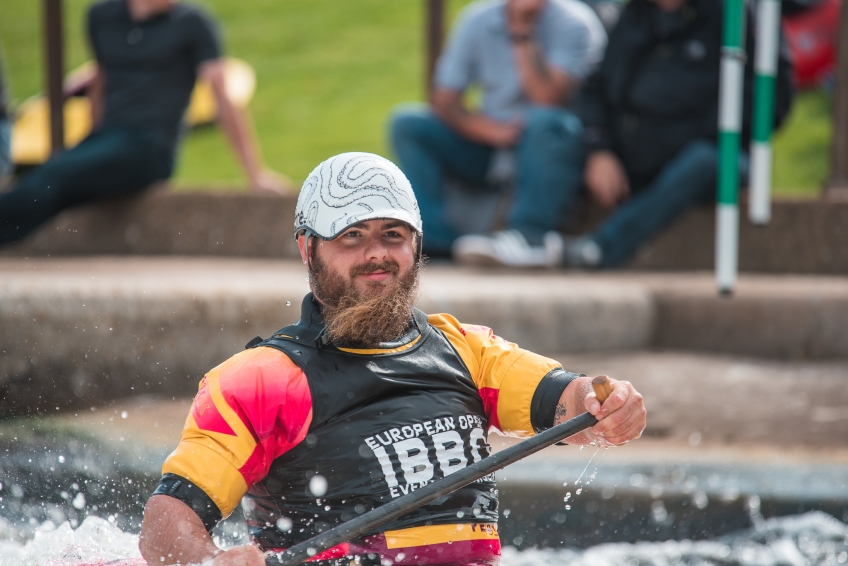 August 31st and September 1st saw the European Open event come to life in Nottingham for the 3rd time.

2019 was the biggest event yet, with over 150 freestyle entries, a very very impressive 40 squirt boat entries, and more events than ever ran before. This year was built up to be a good one!

Saturday was the day of freestyle. Starting at a very reasonable time of 10am, all the paddlers from all categories got going. The experts and intermediates were up at twin waves, throwing dow their best moves from the ICF score sheet. Fairy wave was host to the novices who had a slightly more fun score sheet to tick off, including the shudder rudder, cosmic donkey and the harry potter.

After a good 7 hours of paddling, we had our top 5 from the intermediate and experts for each discipline, and the finals were set. These finals were where paddlers would battle it out to become the British and European Open champions.

Junior ladies kicked the show off with some impressive paddling. The ladies stepped their game up and really impressed. Ultimately it was double world champion Ottie Robinson Shaw that took the win and titles.

Junior men followed them up. This category saw our Spanish and German paddlers, Roger and Tim, making the final with 3 British boys. It was a closely fought battle, but there was a huge amount of camaraderie in the eddy as the boys cheered each other on. At the end of the day it was Toby Marlow that came away with the win and both titles.

C1’s hit the water next. The heats saw event organiser Ibbo taking the lead by storm, 350 points ahead of second place. But all those points were set back to zero, and that lead didn't matter. With some entertaining song requests for the finals, the C1’s put a good show on. Ibbo and Matt Stephenson stayed on after their final to give the crowd a laugh with some C1 carnage. Once the dust settled it was the youngster Matt Stephenson who walked away with the victory, on his birthday too!

The senior ladies were next, with an Austrian, Denise Rebnegger, in the mix here. Big air and lots of moves were on display. For the ladies we saw Lowri Davies take 2nd place, but the British Champion title, and Denise take 1st and the Euro Open champion title! A solid result for the Austrian.

Senior men rounded the night off with some of the tightest paddling we had seen. The big battle was between the top three, Nottingham's Gav Barker, Rob Crowe and Irelands David McClure. Some of the most impressive paddling of the day was on display as the sun set, and the scores came down to the wire. With only 20 points separating 1st and 2nd, both scoring over 1300, it was the last run of Rob Crowe that sealed his victory, and the titles. Ireland’s David McClure was bumped down into 2nd and Gave in 3rd.

Sunday was the time for some hungover heads to get their racing game on, as the day kicked off with boater cross! A fairly simple course was set, but enough to catch some people out. A 360 degree turn at the start, then a Wavesport Fuse to touch, then an upstream gate to manoeuvre, then a sprint to the finish. The heats, quarter and semi finals went on in the morning, setting up the afternoon finals.

Before that there was the synchro freestyle, big trick and downriver freestyle competition to happen! Paddlers moved from section to section showing the judges what they could do. The synchro was in inlet, where two paddlers would drop down and do their best trick in time. Points for execution, crowd hype and a multiplier for their synchronicity.

Big trick was down on the Jaws wave. Paddlers here would just try to wow the judge in any way possible, big air, big laughs and crazy ideas. Every paddler went hard! The down river was the bridge section, so paddlers could macho move over waves, loop in holes and kick flip fairy wave. They then finished their runs with a bid for a daily multiplier in looping pool.

Then it was the turn of the pool inflatables! One of the most loved events of the weekend was back. Paddlers had their chance to take to the water on their best pool inflatables and see who was quickest. From avocados to zebras and everything inbetween, it was quite a sight as 50 plus people took to the water at the same time to race. So brilliant carnage and popped inflatables later, we had some race victors!

The inflatable fun wasn’t over however, freestyle was still to be done! Paddlers took to the fairy wave to show us how they surf, and their best attempts to impress the judges. The sight of rubber duck surfing with an avocado is quite something!

Finishing off the weekend was the boater cross finals. The top 4 paddlers form each category raced it off to be the winner. With a slight course alteration, it was set to be harder and more carnage!

The weekend came to an end with prizes! The whole weekends result had been tallied up to give us the British Club Champions! It was a closely contested battle between the top three clubs, but it was Uni of Nottingham that took 3rd, Kool Kayakers in 2nd and Lee Valley club that took the win, and with it a brand new Jackson Kayaks Rockstar 4.0!

It was a long weekend, but an amazing one. The sun was out, and so many people turned out for it. A huge thank you to all the volunteers and judges that made the weekend possible! See you all next year!