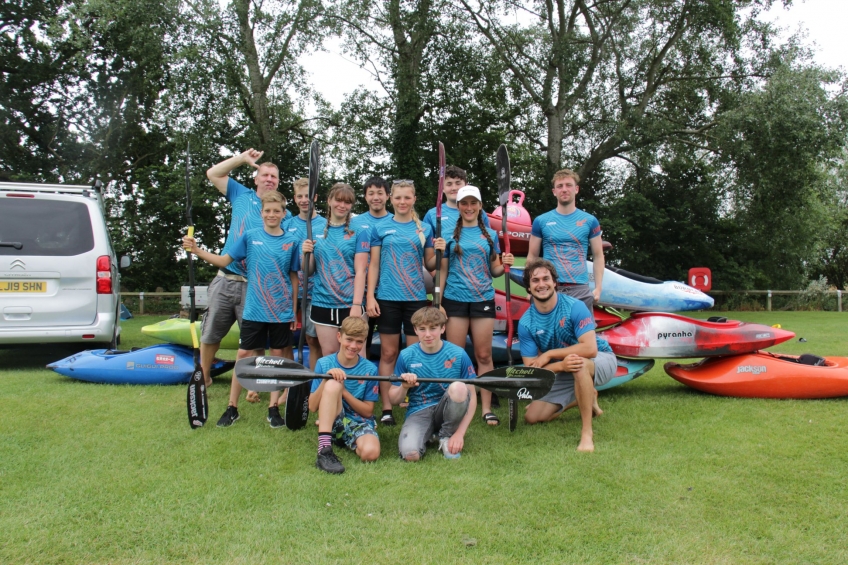 We have just got back from summer camp, one word- AWESOMEEEEE!!!! We started at HPP, England, kids travelled from Japan, Germany, Spain and Britain and were met by coaches Jacko (English), Quim Fontane (Catalonian) and David McClure (Irish), making this a truly international camp. Kids ages ranged from 13-17 with most kids being 15 and under. Not everyone spoke English but we worked things out and all got along. Over 3 weeks we travelled through Europe going to destinations including Platting, Germany; Hardcore wave, Salzburg, Austria; Saint Pierre de Boeuf, France and Makinito, France. The venues vary with sticky holes, huge waves (with beatdowns behind- which some people got to experience) white water courses and weirs. We were super lucky that Plattling had a rainfall just before we left the UK so it was an optimum level and Salzburg came in as this is really uncommon for the summer. We were so stoked to have this even though we looked at bit worried at the Austrian hole- Quim managed to catch our faces on Instagram. After only starting freestyle in September and getting to experience cold winters of freezing water and minus temperatures this trip was great to play about, try tricks without paddles, jump in whirlpools to try and see who could get the most downtime and try to surf Plattling on a pizza inflatable. The coaching was by some of the best kayakers and coaches in Freestyle. We set aims at the start of the camp and this was work on individually as different kids had different abilities. We also look at other things off the water , like more yoga sessions and goal setting.

We met different international freestyle kayakers at different venues throughout Europe and most were really engaged with the Burners programme. Often they offered different advice and had interesting stories of international kayaking. Trips like this make the World and the international paddling community seems so much smaller. Me; Chloe Kinsman (15) and my sister Jasmine Kinsman (13) are very lucky to have experience at such a young age. It is very inspirational.

I shot loads video footage using a drone and action camera unfortunately the portable hard-drive broken and I lost load of the footage as I had almost finishing edit my 1st video. We were gutted but I still made a video with the bits left on the SD cards. Please check it out below!

I have arranged a Burners International meet up at HPP next week for the European open. This should be awesome we have 4 Catalonia, 1 German, 3 Welsh and 8 English kids camping together. This has been a challenge as most kids use Instagram, their parents use Facebook messenger, kids do not look their at email and their parents want everything in an email (I do not have half their email addresses ???). I’m so excited for this event though and its going to be a great experience as we are starting to get to know these international and British kids really well. I know Peak is supporting this event and I hope to make my 2nd video of this, so I will send you an update of how this all works out. Thanks again for the buoyancy aids we were loving our colour co-ordination, being really matching in our summer kit.

See you on water!