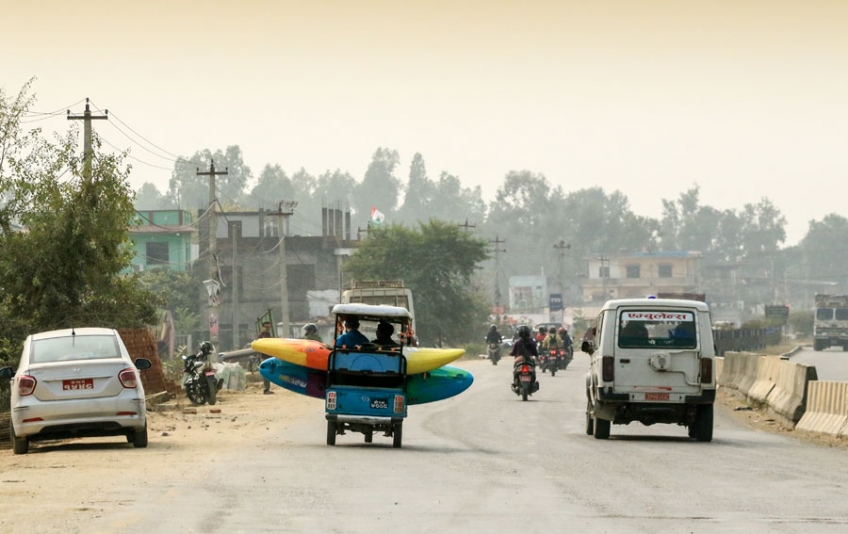 The book doesn’t even need to be good: The joys of living under a tarp on the banks of a Himalayan river or two. This quick article will go into the ups and downs that we experienced as small team on our failed attempt of the Humla Karnali.

All the fear has gone and becomes misery as we’re told we can’t get on the plane to the put in.. Doesn’t help that the air-port, Nepalganj, is on the main trading route from India through Nepal. The feelings now, empty, broken and frustrated. All that effort to get there and progress is stopped at the last hurdle… The build-up to getting to our chosen river, the Humla Karnali, felt like a long and intense process in itself, it began when we missed our connecting flight from Istanbul to Kathmandu. We were faced with a twenty-four-hour delay and eventually re-directed to Kathmandu via Doha. I have to say that I quite enjoyed our brief stay in Istanbul, from struggling to open screw top beers to odd looking rice pudding breakfasts… Anyway, a brief bit of relief came when we landed in Kathmandu and our boats had arrived with us. Brief because the realisation dawned on us that this trip is still on. We had a couple of days in Kathmandu to sort permits, pick up supplies and sort logistics. Mainly how we were going to get from Kathmandu to the airport and then onto the put in. Kathmandu its self is a place that must be visited, it has an odd appeal in its poor wiring, dust, noise and prayer flags. Boats were loaded, none of us slept and we were on our luxury bus for the eighteen-hour drive to Nepalganj with plane tickets and river permits in hand. I was already fairly sleep deprived, our Kathmandu accommodation was opposite a Nepali night club, the high-pitched dance music and trepidation lead to a poor night’s sleep. I figured I get some sleep on the ‘luxury’ bus, how wrong I was. The next eighteen hours felt very lonely indeed, every time I felt like I was drifting off, the road seemed like it was out to kill us. I looked around the bus and everyone else seemed to be asleep, they weren’t, they were doing the same as me. I think. Arriving in Nepalganj, there’s no charm here, all these feeling came out in a mini breakdown, I needed to be either at the put in, putting on my spray deck or calling it and heading home. Fortunately, with enough sleep and some reassurance from Pete Catterall, I was able to pull it together enough to make it to the airport. Tickets checked; boats scanned all that was left to do was pay for the boats. Little lesson learnt here, travel with cash! We were assured in Kathmandu that the airport would take our cards, this was far from the truth, a broken card machine that constantly said that our cards were faulty led to a standoff between Dan Wilkinson and the airport security, Dan was clearly after getting his card back and the staff at the airport were doing their jobs. In this case trying to confiscate Dan’s card….. After being escorted out of the airport and a Tuc Tuc ride we were back at the hotel in Nepalganj figuring out logistics for plan B, the Thule Beri. The hotel found us a driver and a price and we were off again, this time in a battered old Jeep. We looked at the map and guessed at eight hours to the put in, after a day and half of traveling on poorly build dust roads and communicating in broken English, mainly no and why, we found ourselves getting onto the Thule Bheri just below the main portage of the run. The Thule Bheri is a six-day remote run a few valleys over from the Humla, the Humla is fourteen to sixteen days on the river meaning we had double (maybe triple) the food needed for the journey. Before setting off we handed over the unneeded food to a few local kids and headed off with boats that were just heavy rather than really heavy. Cruisey grade two to three took us to our first river camp and best night sleep of the trip. With kit drying Alec and I went and collected wood for the fire while Pete and Dan tried to fix the leaky stove. With all the dust and stress the weak capillary in my nose played up leaving me with a heavy nose bleed, poor Alec looked round to see both the stove and me leaking… The Thule Bheri was well worth the effort. Running through a combination of steep sided committing gorges, remote villages and boulder choked rapids I think we all felt a little happier and lot calmer. The boats were incredibly heavy and full of everything needed to survive the trip meaning decisions on the river were based around weighing up the dangers of the river versus the dangers of portaging. Heavy boats take a while to get up to speed and don’t stop once they’re traveling, picking up those heavily loaded boats and moving over broken ground was truly draining. Camp two on the river definitely felt less chaotic than camp one, no blood and no petrol! Camp food was delicacy in itself, rice, lentils curry mix and dried spicy beef. Breakfast was heated up and sweetened muesli and lunch was either pasta or noodles. Due to this diet on the river, anything sweet tasted amazing, the odd snickers here and there went down a treat. As we continued further along the Thule Bheri with boats getting lighter and easier to pack every day, we came across one of the villages that calls the river home. Usually friendly, the locals were often happy to see you and intrigued by the kayaks. This village had a different feel on the drive up, all was friendly until what seemed like the village drunk came out to meet us, what was curiosity quickly became hostility, a lot of shouting and asking for money, we were all pleased to be driving past. On the paddle through, the villagers were on the bridge and seemingly in good spirits, a lot of shouting and waving was going on and I figured this was a good time to get the token piece of footage, waving at the locals as I was waving back. This was from a helmet cam, helmets off, I’m filming what I thought was a friendly interaction to hear the others shouting at me to put my helmet back on. The locals were throwing stones at us. After another couple of nights and two more gorges (I think) we were on the flat paddle out of the river. All the technicality has gone, the committing feeling is behind us and all that’s left to do is float out amongst dugout canoes, monkeys and riverside funerals. These lower stretches are far more accessible by the villagers meaning it becomes a resource for them. We paddled under fishing lines that spanned the river, past holy men and their temples and makeshift bridges and huts that were being built. No doubt most of this will get washed away in the monsoon seasons. At the take out we changed into our now stinking, sand filled evening clothes and began waiting for a bus to take us out of the Thule Bheri, our wait wasn’t long before a local bus stopped and picked us up. As our original river choice was longer we still had time to fill, a plan had been hatched to travel to Pokhara and find another river from there. The bus wasn’t heading to Pokhara, again, in broken English with people trying to translate we ended up being taken back to Nepalganj. Back to the place where I’d dropped all the darkness previously experienced, the other option was Kathmandu and we weren’t ready to head home just yet. A shower and another night in the same hotel and we were on the road yet again, this time a taxi to Pokhara. The police wanted our money due to ‘unsafe loads’ and this driver was by far the sketchiest, we all had bad backs by the end of this journey due to being constantly in the braced position. After a couple of days chilling in Pokhara doing the touristy thing we were at the put in of our second river, the Marsyandi , this river is very different to the Thule Bheri. It felt open and friendly with rapids that had a ‘read and run’ technical feel to them without feeling like you were committed. This river also felt like it had more volume to it and was clearly more accessible with its signs of industry and rubbish tips towards the damn. This run could be done in a day, but we’d been through lots of stress and just wanted to enjoy the river and the area. Classic white water, friendly people and a camp spot with a view. Annapurna in the sunset makes for one hell of a back drop to finish of your lentils, rice and spicy beef. At the take out to the upper stretch Alec and Dan wandered off to find somewhere to stay leaving me and Pete to look after the heavy boats that we’d dropped by the roadside. An inquisitive café owner asked what we were up to and delighted in telling us that we could stay there. Our final night on the river was spent on the bare concrete floor of a café that was missing its back wall. Despite its dilapidated feel, the café created the perfect last river night for us. Lots of smiles, Dhal Batt and a glorious sunset view from the missing wall before falling asleep on the concrete behind the kitchen with the sound of rat traps going off. Quick spicy omelette and were on another bus back to Kathmandu and home. We received lots of grief for the mess ups that happened along the way and I don’t really mind, it falls on deaf ears. Mainly because it was a trip like no other, I’m sure it would have been memorable if it had gone to plan but I certainly won’t forget the chaos that happened on the trip. Asia factor as Pete put it. I was asked what the best bit of the trip was and I had to say it was the river living, you, a bivi bag, a sleeping bag and a good book. The reply I got (from one of the main sources of the grief) was the book doesn’t even have to be that good. The best team ever, thanks to Pete Catterall, Dan Wilkinson and Alec Banner for being top river buddies and thanks to Pete Catterall and Dan Wilkinson for the invite. A thank you to Plas Y Brenin and Whitewater the Canoe Centre for the ongoing support and big thanks also goes out to Peak for the dry-suit that kept me dry and the thermals that kept me warm and didn’t stink too much... Chris Evans is a paddlesports instructor with our partners at Plas-Y-Brenin National Outdoor Centre in Snowdonia. For more info on Chris check out his team profile and learn more about the courses available at Plas-Y-Brenin at pyb.co.uk/paddle.