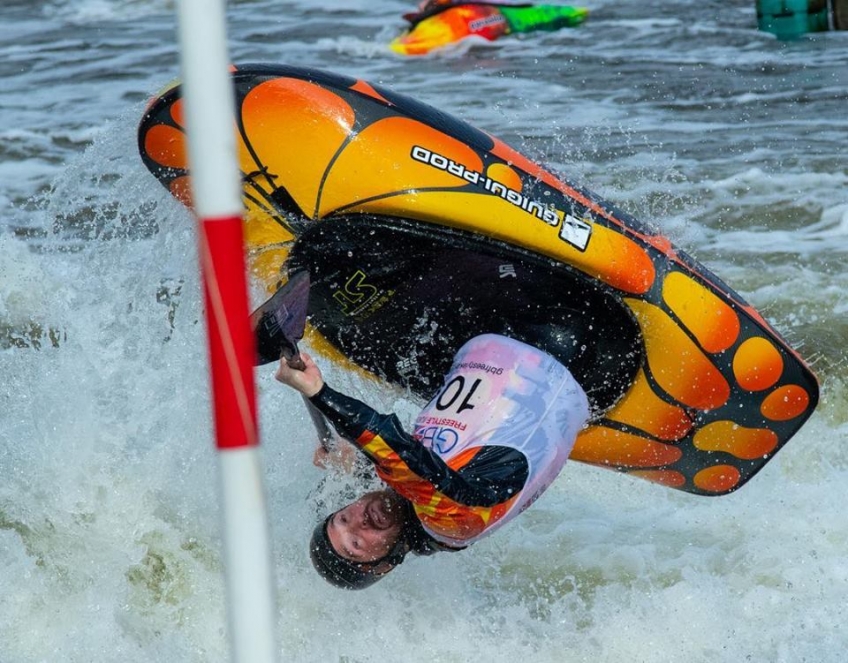 Freestyle team selections round up

The last Sunday of April saw Britains best freestyle paddlers flood to Nottingham to compete in the selection events for the Great Britain team. This year the team selected would head out to Sort, Spain, for the World Championships.

The mornings event took place on the world renouned Inlet gate, where paddlers would have four attempts to put down their best two rides. To kick things off was the junior girls. Current world champion Ottilie Robinson-Shaw had a free pass to Sort to retain her title, but she still took part in the event. It was a clean sweep for Ottilie, who laid down two rides that would have won the senior ladies event. The other junior ladies also put on a strong show, with some good scores.

Junior men followed them up. With the top three boys from previous years now in the seniors, it was all to play for. Three very strong heats of boys came down and busted out some good rides. In the end it was Asha Gurung that took the top spot. C1's quickly followed after, with five strong paddlers hunting down the three team spots. Big scores from the top three paddlers put them aside from the other two, with Matt Stephenson taking away the first win, and Peak UK's Ibbo securely in a team place.

Senior ladies stormed down after the C1's. Reigning world champion Claire O'Hara had opted out of this competition having already been preselected for the team. This didn't make the job any easier for the ladies however. All of them stepped up the game and threw down big rides. After the last trick was thrown, it emerged that Lowri Davies had took the top spot, closely followed by team Peak UK's Islay Crosby.

The K1 men rounded the morning off, and they did this with style. Former world champion James 'Pringle' Bebbington was making his competition come back, and world and european championship medalist Harry Price had moved up into seniors. This made for a very tight event. After countless huge loops, lunar orbits, backloop mcnasty's and other fancy tricks later, Peak UK's own Rob Crowe landed himself on top of the results; new senior Harry came second, Peak's Gav Barker and Pringle came in third and with respectively.

After a quick lunch break the action kicked off again down in the Twin Wave feature. With the same running order, the junior ladies kicked off the show. Ottilie impressed as always, but taking home the top selection series points from this event was Abi Goddard with an impressive two runs. This landed her in with a good shot at making the GB team this year, alongside Jen Leal. It was a tie for the third place team spot between Maya and Charlie Aldred, so a nervous wait for them until the selection panel announce the official team list.

Junior men dropped into the feature next, hunting down them big tricks to score the points. Once again Asha showed his skill and composure to take the top spot, landing him right in the mix for a team place. Closely behind was Ben Higson and Toby Marlow, who both finished top three in the morning, hopefully earning them a spot on the team too.

C1's had a real fun time in the feature. With half the paddle came twice the paddle backs it seemed, with only a couple of paddlers managing to stay in the feature for an entire ride. But this didn't mean there was no action, as they all made every second in the feature count. Huge loops, impressive entry moves (if i do say so myself) and brilliant flushes gave out some good results. Young Matt took the win again, taking the overall win, Peak's Ibbo slides into second, giving a second place in selections overall. Ben Pamplin threw a spanner in the works with a third place in this event, trying to recover from his fourth in the morning, pushing Ramadan down to fourth in the afternoon. However, this wasn't quite enough to best the veteran paddler, and Ramadan finished third in the overall selection standings.

The ladies remained cool and composed throughout. Emma Witherford was the one to watch in the afternoons event. Dropping in a big ride to take that important win. Our very own Islay Crosby powered into second, securing her team place for Sort.

Finally, the very closely fought competition for the senior mens team. With a win under his belt, the pressure was off Rob Crowe but that didn't stop him. Big air in all his moves saw him move up the score board. But it was Gav Barker who came out top by throwing big moves, and lots of them. Pringle landed himself a solid third place here too. So as long as our maths is correct, all the Peak UK K1 men are in those important top five places to make the team.

The official team announcement will be out soon, but it all looks good for our Peak UK team paddlers, Rob, Gav, Pringle, Ibbo, Islay and Claire. Preparations for the world championships will start straight away for them as the event is only two months away! So keep your eyes peeled for updates as we get closer!