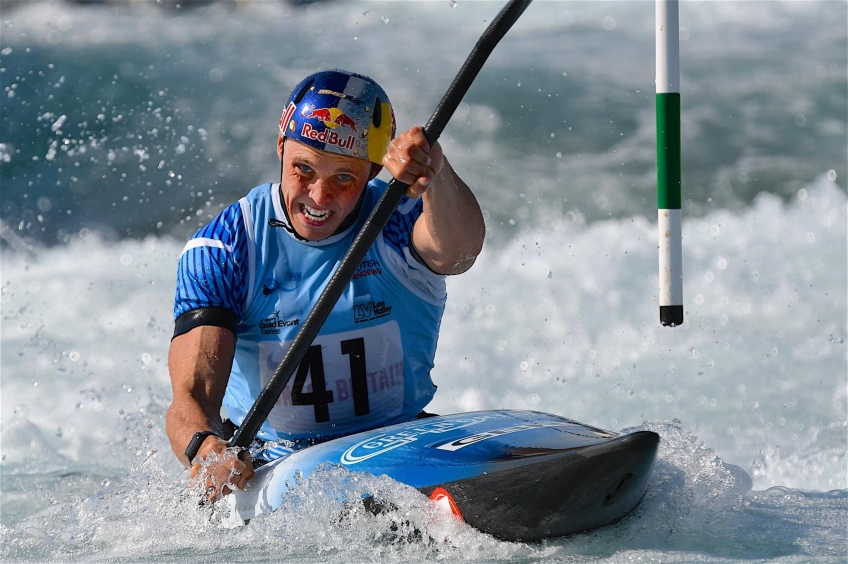 Last weekend saw the British Senior and Olympic team trials at Lee Valley White Water Centre. With plenty of senior team places up for grabs, the standard of the paddling was nothing short of world class.

In the beautiful Easter sunshine, there were wins for Kimberley Woods (C1W), Joe Clarke K1M), Adam Burgess (C1M) and a joint first place for Fiona Pennie and Kimberley in the women’s kayak.The format for day three was only the top six boats progressing from the semi-finals to the final in each of the four boat classes.

The C1 men was an intense affair with, subject to ratification, just one place left in the team, with Ryan Westley having been pre-selected and David Florence winning the first two races. Will Smith and Adam Burgess delivered clean and fast runs in the semi-final to put them in a one-two going into the final later on in the morning, less than a second splitting the pair. Florence finished third following a couple of touches that steered him away from the top spot after initially going down the course quickest. In the final it was Burgess who came out on top, delivering an impeccable time of 89.89 , 0.55 ahead of Florence – and from a selection point of view, 3.68 ahead of Smith, who also picked up a two-second penalty. The win puts the 2018 European silver medallist in a good place for team selection as he looks to get onto the senior team for an eighth consecutive year.

The K1 Women’s final literally could not have been closer with Fiona Pennie and Kimberley Woods posting exactly the same time in the final, putting them in contention for selection onto senior team once again. Finishing sixth in the semi-final, Woods was first to go down during the final and she put down a fast benchmark of 94.77 for the rest of the field to chase. A touch from double World Championship silver medallist Mallory Franklin  on gate 17 put her out of contention for top spot and it was the experienced Pennie who smashed her run down to cross the line in exactly the same time as Woods.

The Men’s K1 final was set to be a spectacular affair with Joe Clarke and Bradley Forbes-Cryans both having secured a first and second placing and sitting on equal points and provisionally doing enough to book their place on the team, leaving the third spot on the team up for grabs. With crucial Olympic qualification points at stake, Chris Bowers put down a solid marker to take the lead with only Forbes-Cryans and Clarke left to go. A clean run by Forbes-Cryans saw him take the lead before he was pipped to the post by the reigning Olympic champion Clarke, who was just 0.47 seconds faster to claim top spot and his second win of the weekend. Bowers’ third place puts him in the frame for the final place on the K1 men’s team.

The weekend rounded off with the women’s C1 final, which was without pre-selected Mallory Franklin. While Kim Woods did enough on day two to secure her place on the team, the Rugby athlete took to the water for the 12th time this weekend looking for a win and consolidating those crucial Olympic selection points. Woods was last off and was chasing the 112.15 marker which Sophie Ogilvie had put down in her run, ahead of Bethan Forrow with 112.97. Despite a touch on gate 8, the two-time European gold medallist crossed the line in 106.44 to claim maximum points. Subject to the official ratification, Ogilvie’s third place should be enough to claim the third place on the senior team this season.