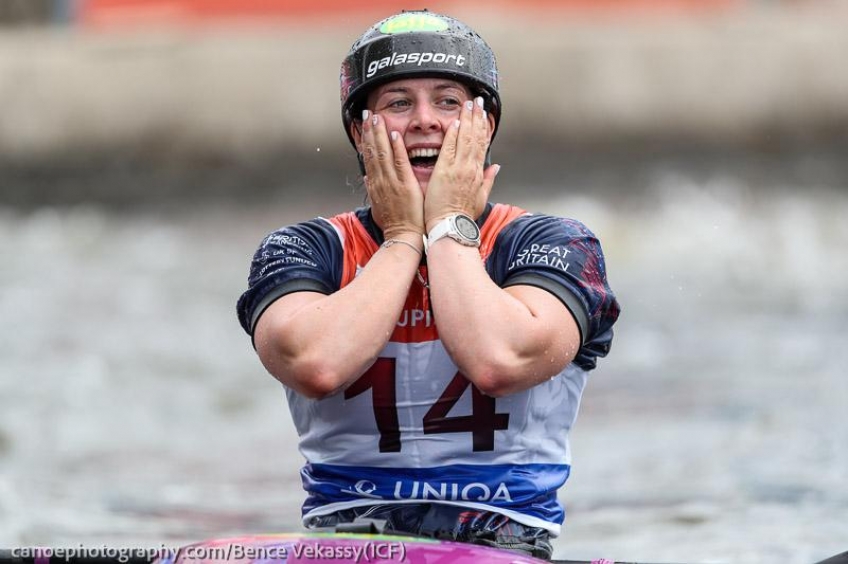 Prague – My favourite venue. Technical, physical, challenging but a lot of fun!

Due to covid restrictions and traveling from the UK to Czech Republic and then to Germany for world cup 2 it was not possible to do it like we normally do – travel Sunday, training Mon-Thursday, then race. We had to make a decision to come out early to be allowed to train before World Cup 2. A lot of forward planning! However being in Prague early was a no brainer!

We received brand new racing kit for the season (which Nikita Setchell helped design) a couple of days before having to pack everything before the trip and I was even more excited to be heading away again. I have been going to Prague almost every year since 2012 and each time I love it. 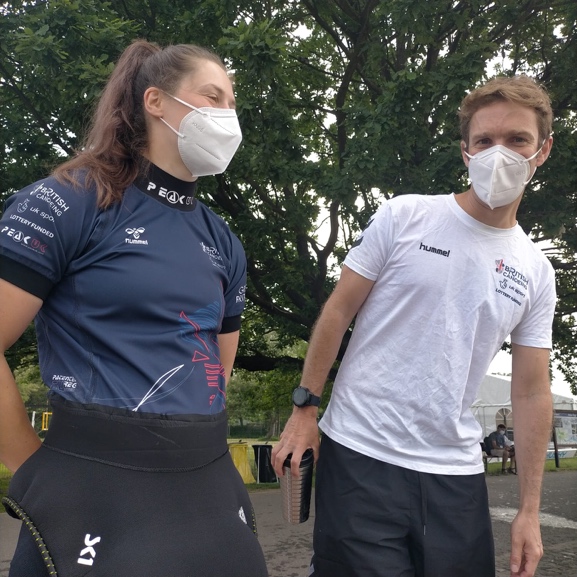 Once we were out in Prague it was after numerous tests and waiting confirmation of a negative covid test before some of the team headed to the course to train in the late evening slot. My first session was the next morning. The first few days are all about retraining the body and the mind of how the features work here. Prague is a very technical course and very fiddly. The eyes must be aware of the space you have, you have to be dynamic and get those fast twitch figures activated!

The exploration on the course is endless. As I looked across my teammates in training there was a lot of learning, a lot or exploring and a lot of smiles. We have really missed being away so much and enjoying every moment because last year we had nothing. Race day soon approached, and we were ready. I was only racing K1 at this race to help my preparations for the Olympic Games next month being able to only have that 1 class put a bit of pressure to perform as there was not a 2nd chance with C1 to make the podium. I didn’t feel quite like my normal exited adrenaline rushed self in the start pool, but I knew I had set a good plan that I was confident with and kept the boat moving as much as I could to then qualify in 7th with a 2 second penalty.

Throughout the heats day there were a lot of tight racing throughout all the classes. Joe, Mallory and David all managed to qualify on 1st runs whereas Fiona, Sophie, Bradley, Chris and Adam all had to show they had what it took to make the semi-finals. Thankfully even with the tight racing they all showed great pace to absorb penalties and make it through.The course was then set for the finals. As always Prague delivers with tight staggers and moves that can have different options making it difficult for the athletes to decide on what is quickest and what could be worth the risk. As we were all qualified into the semi-finals, we all had a chance to give it a go!

Fiona and Mallory found the course challenging and picked up a few penalties meaning they weren’t to progress. Mallory could then rest up and review C1 video for the following day. Fiona is also taking on the Extreme Slalom on Sunday afternoon. The K1s are able to take on moves forwards but we still saw a lot of variety in the women. I managed to find my rhythm this time and I was upbeat and excited for what was ahead of me. When I felt slightly offline in the run I never once felt panicked and had the confidence to stay calm and paddle to my plan trusting I had speed to take things on. I did however, hit 2 gates but was very fluid throughout my run so was enough for a 4th place for the final.

The K1 boys gave it their all, Chris was first off and showed a great time but picking up a penalty. Similar with Bradley, good pace but too much pace into the upstream 13 firing in like a rocket into the inside pole with no chance to avoid it but kept a cool head to the finish. They both had a very long time to wait with a lot of mistakes going down and it being Prague you never know until its over but today wasn’t their time and they finished 14th and 15th. Bradley will be gutted that he couldn’t show his potential ahead of the Olympics but he has got the pace and the ability to be up there. Chris will also be looking toward his most important race next month in Tacen for the U23 Worlds. Joe showed good form later finishing 7th in a comfortable place for the final. 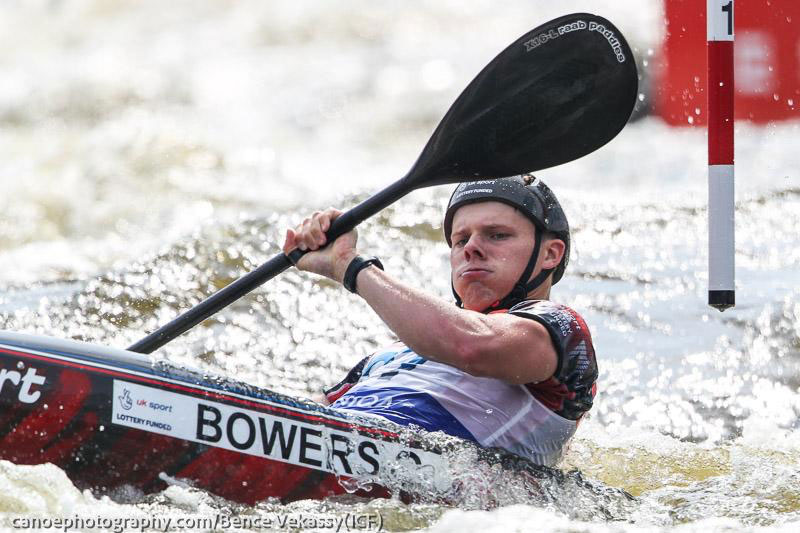 Normally the banks of Prague are full of life and people clapping every athlete top to bottom. With the venue being closed to the public you might have thought the feel-good factor and the adrenaline you got from the atmosphere wasn’t there… you’d be wrong. The commentators at the race are absolutely incredible and they never lose enthusiasm and are always super excited. This encourages you to keep pushing that extra bit to the finish. Both myself and Joe showed great pace in the finals, I kept fluid and paddled almost exactly how I wanted to although picking up a penalty after the 2nd split, going through the finish thinking they had already included my penalty hence. I was sat in bronze medal position until Klaudia Kwolinska showed her amazing form from her semi-final run but keeping it clean which gave her the gold medal. This then pushed me to 4th place. 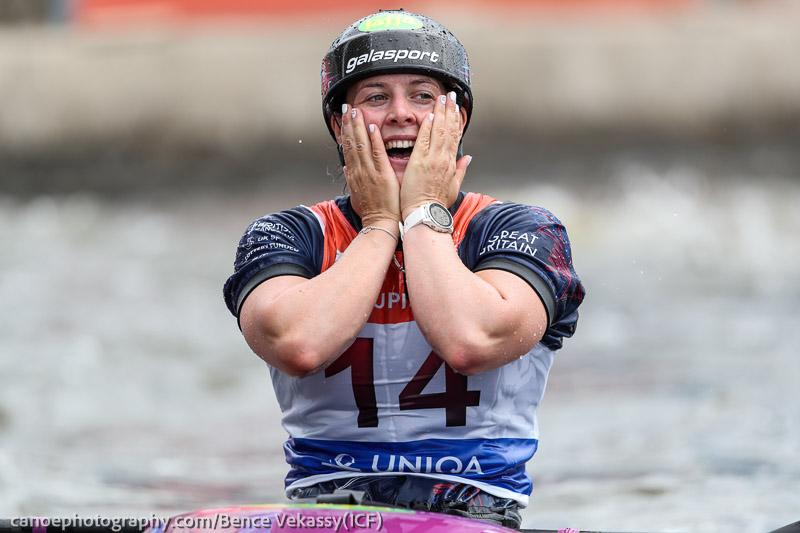 Joe showed very good adaptability towards the bottom end of the course breaking out a little early for the up right but showed his skills to push back and get inside it. He then pushed very hard to the finish and sat in a medal position for a long time until Jiri Prskavec came down doing what he does best and taking the win pushing Joe into 4th. He is showing great form at the moment considering he had been experiencing some niggles that he probably doesn’t feel quite 100% we can’t wait to see what’s to come! 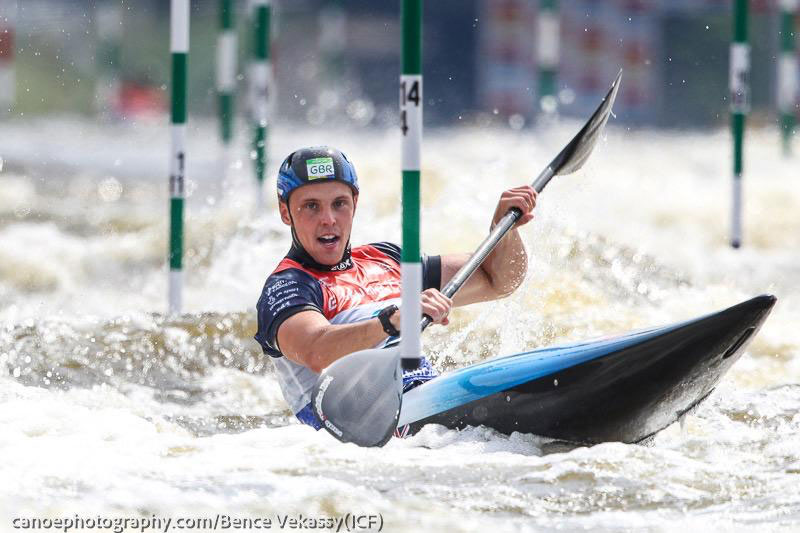 The C1s then had a lot of decisions to make. A lot of options for spins vs straights. With covid safety the athletes who had finished racing were not permitted to be at the course therefore I had to watch the racing on my laptop. Sophie was up first, and she took an early touch on gate 1 which later caught Mallory off guard as she also took a penalty on gate 1 too. Sophie continued to fight with grit and determination to finish the course off strong, but it wasn’t enough for the final today. She will look to take all the experience and learning from this world cup onto the next but more importantly onto the U23 World Championships in Tacen next month. 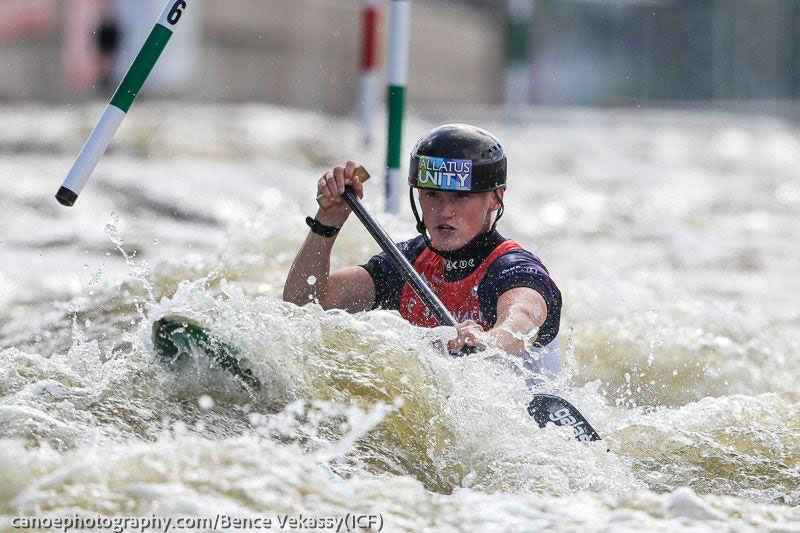 Mallory was off last and although hitting gate 1 would have thrown her off a bit, she didn’t show it and kept the boat running very smoothly to go into the lead and going off last in the Finals.The C1 semi-finals were up and Adam put down a very good run to start qualifying in 3rd position, David had a very agonising waiting sitting in 10th place with Sideris Tasiadis the last paddler to go. He picked up and early 50 second penalty meaning we had 2 British boats in the final.Mallory was last to go in the Final. Jess Fox was off early in the class and had put down an incredible run almost 5 seconds ahead of the next paddler.

We all knew if there was one person who could match and beat that, it was Mallory. She kept it smooth and calm until she got into trouble where Joe had to adapt in his run. Although she didn’t have 2 blades to help her, so got caught on the inside pole unable to avoid it costing her crucial time, the sprint to the finish is the hardest and it was agonising watching the clock tick past Jess’s time and, unfortunately, she slotted into 4th place. She will be happy to have more start line experience after the pandemic and will take a lot into the next races. 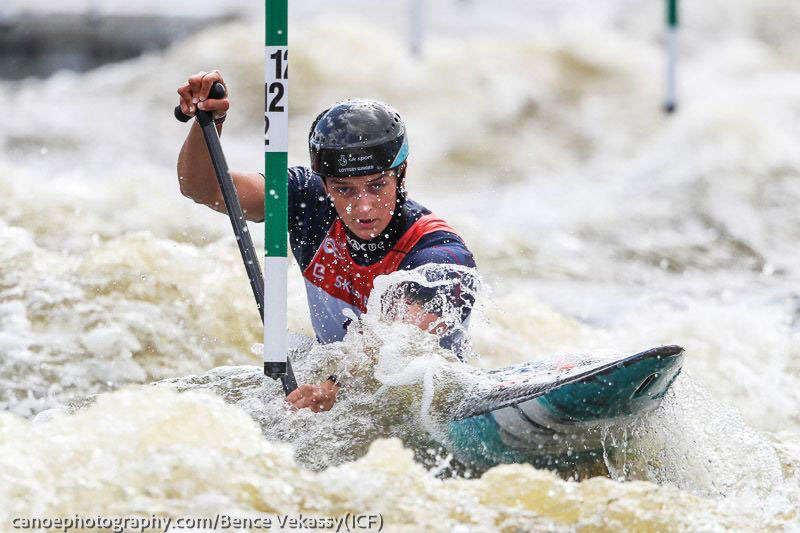 David was off first, calm collected but forceful and aggressive showing that age is just a number and showed everyone he is still one of the best in the world putting down a very fast time. Local Lukas Rohan was off pace on the first 2 splits, including a 2 second penalty, we all were thinking David was still going to be in the lead however Lukas smashed the last part of the course and just snuck into the lead with an incredibly fast time. Adam was the last British boat, he showed great pace a time that would have given him a medal but a late 50 second penalty pushed him to 9th. In the end David managed to hang on to that Silver Medal position bringing home a medal, his first medal since 2018. Adam will feel bitter sweet with that penalty but happy that he is on the right track to the Olympic Games and things are looking good. 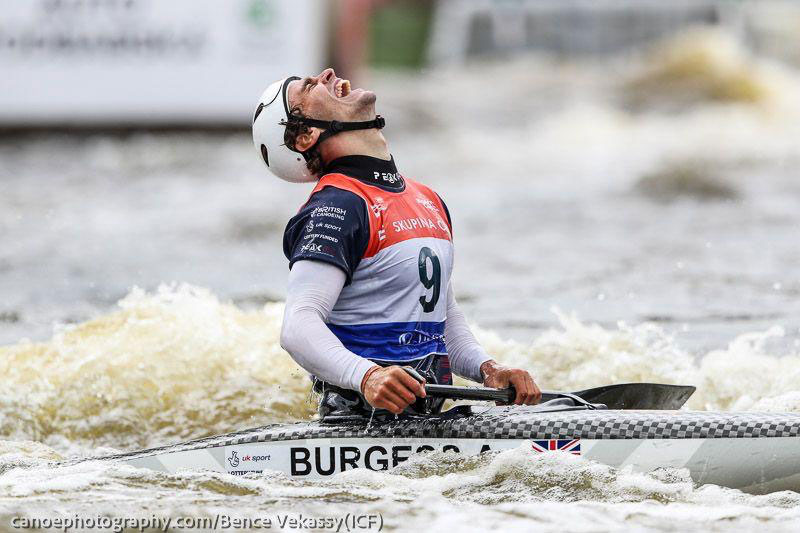 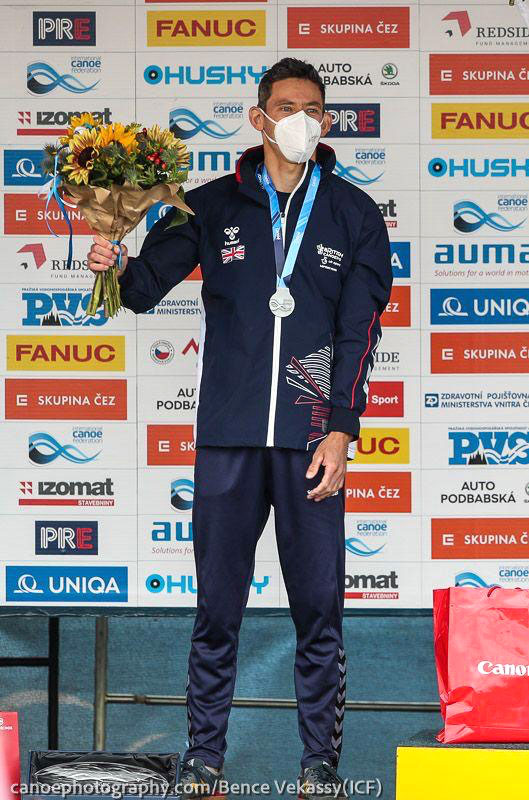 Later on was the extreme, Sophie was given a safety fault in the heats, Joe had a very difficult quarter final and got pushed around a lot so didn’t manage to progress. Fiona made it to the final and it wasn’t going to be easy. Fast off the start but got overtaken in one of the upstreams and from there found it difficult to catch up but happy to bring a silver medal home too. It is always a new experience with extreme slalom and we are just learning what are good tactics! 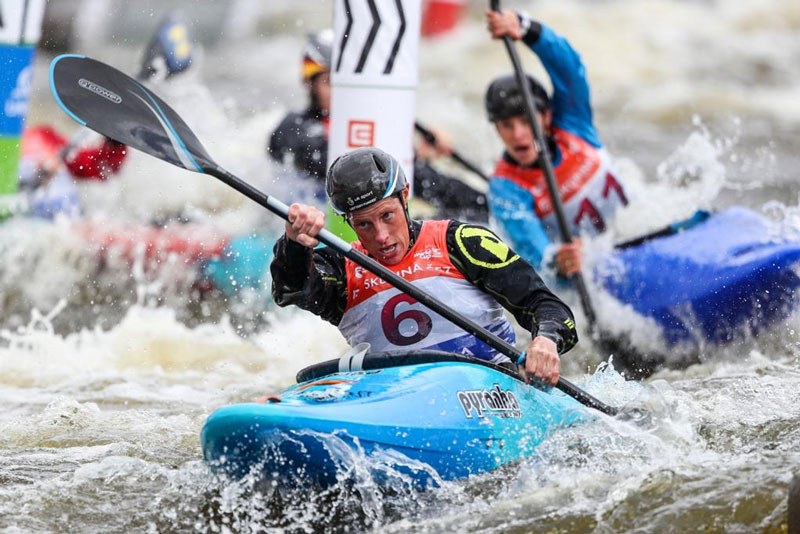 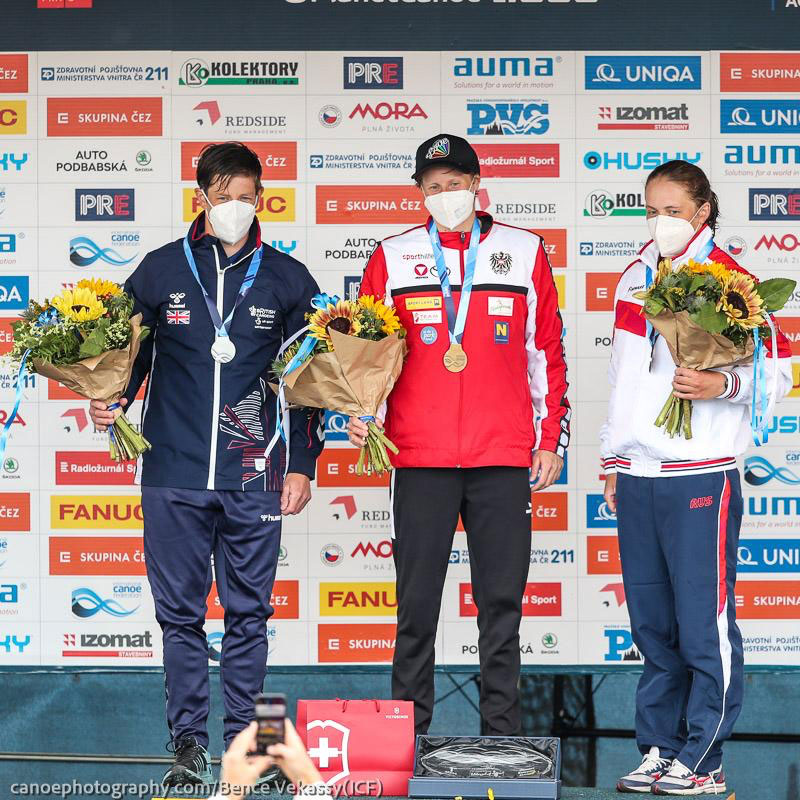 It has been incredible being back here and racing freely, the whole team have done incredibly well to have over half of the athletes in the final it shows that we haven’t lost our touch after having a year off. I take even more confidence from this race than the last and I am still so hungry to get onto that podium. Next week is Leipzig, a course that is very difficult with a lot of features but our experience on Lee Valley will help.

See you all soon!